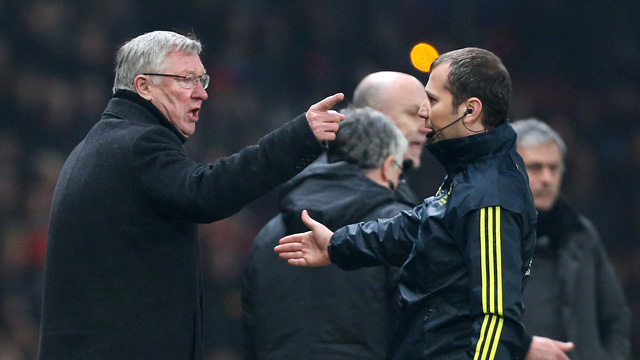 Real Madrid advanced to the quarterfinals of the UEFA Champions League last night thanks to a 2-1 second leg victory over Manchester United at Old Trafford (Real advanced based on a 3-2 aggregate following a 1-1 home draw in the first leg).

But the match was not without controversy!

That moment came during the 56th minute with United leading 1-0 (and 2-1 on aggregate) when United winger Nani was issued a red card by referee Cunyet Cakir for a high challenge on Madrid defender Alvaro Arbeola.

There is no question that the match – and the tie – turned on that decision.

It took Real just ten minutes to turn their one-goal deficit into a one-goal advantage thanks to strikes from substitute Luka Modric (who came on three minutes after Nani’s dismissal) and Christiano Ronaldo (making his first return to Old Trafford since his record transfer to Madrid).

By that point it was pretty much game over.

The decision by referee Cunyet Cakir will forever be the talking point of this match. But was the Turkish ref right to issue a red card to Nani and did it cost Manchester United the match?

My personal opinion was that the decision was a harsh one. If you watch the video of the play in question (see below) you can see that Nani was playing the ball and not the man. Sure, he did himself no favors by having his foot so high and his studs exposed, but I thought that it was worth nothing more than a yellow card (caution).

However I will not go as far as to say that Nani’s red card was the reason why United lost.

To say that would take away credit from Real Madrid, who were unlucky to be down a goal despite having the majority of possession thanks to an own-goal by Sergio Ramos.

Luka Modric’s goal was a brilliant individual effort, a scorching right-footer from 25 yards out to beat goalkeeper David de Gea with United playing all their players back. Christiano Ronaldo’s game-winner was beautiful team football. Special mention must be made to Madrid’s goalkeeper Diego Lopez (playing instead of captain and club icon Iker Casillas) for made a series of brilliant saves towards the end of the match (definitely my Man of the Match!).

United had several opportunities to grab a second goal even with the man-disadvantage but could not convert. Haven’t we seen teams win games when they have been a man down before? Plus, Ferguson’s decision not to start forward Wayne Rooney is one that deserves questioning as well.

Like it or not, Real Madrid deserved to victory yesterday. They were the better side, the more talented side.

Too bad this match will be forever remembered as the one that Cunyet Cakir stole from Sir Alex’s men.