Teams (like the Celtics back in November) can resorted to flooding the middle of the field, giving Lionel Messi very litte space to operate

Ask any knowledgeable soccer fan which side is the best in the world and more likely than not the answer will be FC Barcelona.

The orchestra is led by the maestro, Lionel Messi, the world’s best player, with support from other world-class players like Xavi, Andries Iniesta, David Villa, Cesc Fabregas, and Pedro.

When they are on top of their game (which is more often than not) they are a sight to behold – not only do they play a brand of football that is eye-pleasing, with their tiki-taka style of short-passing, but they get results. At their best they are a soccer fan’s dream – and an opponent’s nightmare!

But are we beginning to see chinks in the armor?

Last week in the UEFA Champions League round of 16 first leg, the Catalans were soundly beaten 2-0 at San Siro by AC Milan, leaving them on the brink of elimination.  Last night, they were outplayed and outclassed by Real Madrid at home in the second leg of the Copa del Rey.

Most people (including this humble writer) didn’t see either result coming.

Many people do not see two bad results in a two-week span to be cause for panic. After all, this is still a team with a 12-point lead in La Liga, but there definitely seems to be a few problems developing in the horizon.

Here’s the problem I have with Barcelona: they only know how to play one way (tiki-taka), and it looks like there are teams that are beginning to figure them out.

Suddenly there is a blueprint on how to play Barca. It involves:

Chelsea became the first club to have success with that approach when they eliminated Barcelona in the Champions League semis last year. They were content to concede possession, play as many men back as possible, and hit them on the counter. Then in the group stage of this year’s tournament, they were upset by Celtic (Scotland) 2-1 back in November. Last week AC Milan were even more effective using the same strategy in their Champions League victory. 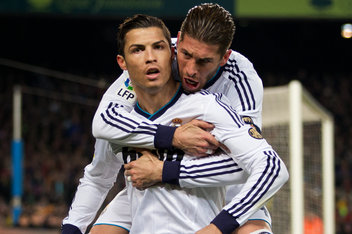 Then there is Real Madrid.

In Madrid’s first clasico in the Jose Mourinho-era, they were taken apart in a 5-0 drubbing. Not named “The Special One” for nothing, Mourinho began to tinker with his approach, opting for a more defensive approach despite having an equally-talented club.

In last night’s victory, Madrid used the blueprint in all three of their goals. The first came when a counterattack left Christiano Ronaldo one-on-one with Gerard Pique, which resulted in a penalty. The second, another counter, this time with Angel Di Maria against an old and slow Carlos Puyol. The final goal came off a corner kick, Barca’s poor marking and lack of height exposed yet again as Raphael Varane made them pay.

So what do you think? Is this cause a bad stretch in what is a long season, or should there be some cause for concern?

Certainly, I believe that it is time for the club to have a Plan B for the occasions when Plan A isn’t working. Perhaps they should invest in a big striker where they could play over the top (note: they had one in Zlatan Ibrahimovic!). For a team that has not had a clean sheet in 12 games, something has to be done about that defense!

But then again, I could be overreacting. They still are the best side in the world.