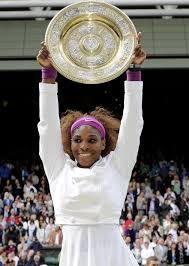 In handicapping the 2013 Wimbledon for the men, many find it almost impossible to go outside of the Big Four of Novak Djokovic, Andy Murray, Roger Federer and Rafael Nadal.

In handicapping the women, there is one name that stands out among the rest – Serena Williams!

Serena Williams, as expected, is the overwhelming favorite here at the All England Club, where she was won three of the last four singles titles (including 2012).  Her 67-8 record at this venue is the best among active players in this year’s tournament (only sister Venus who has withdrawn from the tournament with a bad back has more wins) and whereas no one else in the draw has won this title more than once, Serena already has five and is looking for a sixth. At this point the world number one is seemingly a lock to do so as she is playing perhaps the best tennis of her illustrious career.

Is there anyone in the draw who can derail Serena?

Serena Williams’ Quarter
Just like the French Open, Serena is aided by the fact that both the 2nd (Victoria Azarenka) and 3rd seed (Maria Sharapova) are on the opposite side of the draw. Even with that, she has a very interesting draw. Her second round opponent could be China’s Jie Zheng. Zheng plays well on grass and she did push Serena in their match here last year (9-7 in the final set). Her fourth round opponent could be either the Aussie Samantha Stosur or the hard-hitting German Sabine “Boom Boom” Lisicki. Given their track record (Stosur does not like grass despite having the game for it, whereas Lisicki seems to fare well here), one would have to expect that it would be Lisicki. Lisicki have the power game to go toe-to-toe with Serena, although she is not quite as consistent. The other top seed in this section of the draw is another German, 7th-seed Angelique Kerber. Kerber, who made the semis here last year, has been up-and-down in 2013 but she should be pleased with her draw leading to the quarterfinals.
Quarterfinals: Serena Williams vs Angelique Kerber
Winner: Serena Williams

Agnieszka Radwanska’s Quarter
Last year Radwanska became the first Pole (male or female) to make a Grand Slam singles finals before falling to Serena in three sets. She also had a chance to become the number one ranked player in the world as well. Today that might feel like a distant memory as Radwanska seems to be closer to the rest of the pack than she is to the three players ranked above her. Despite her lack of power, her touch and craftiness have served her well on grass. Her draw seems to be well set up for a deep run again this year. She would be disappointed if she did not at least make the quarterfinals here. The next highest seed in this section of the draw is Li Na of China. Li Na can be very unpredictable but she is more than capable of defeating Radwanska should they meet. Given that this looks to be the easiest quarter of the draw, that meeting looks all the more likely.
Quarterfinals: Agnieszka Radwanska vs Li Na
Winner: Agnieszka Radwanska

Maria Sharapova’s Quarter
Many have named Sharapova as the next-in-line should Serena Williams falter. However a deeper look shows  that Maria has not yet quite the success at Wimbledon as one would think. Part of that of course is due to her shoulder surgery, but the fact of the matter is that Sharapova has not won here since 2004 and has only made the finals on one other occasion (2011). Last year she fell in the fourth round to Sabine Lisicki. This year her fourth round opponent could be Marion Bartoli. The Frenchwoman has defeated both Serena and Justine Henin at Wimbledon and is a former finalist here, so she is capable of pulling off the upset. The top names on the opposite side of this section of the draw are Sara Errani and Caroline Wozniacki, both of whom do not fare well on this surface. This could provide an opportunity for a lower seed to make a run here. Could it be young American Sloane Stephens?
Quarterfinals: Maria Sharapova vs Sloane Stephens
Winner: Maria Sharapova

Victoria Azarenka’s Quarter
Vika has been a strong contender here the past two years, losing in the semifinals to both eventual champions (Petra Kvitova in 2011 and Serena last year). She looks set to go a step – or two – further in 2013. An easy first three rounds will give her a chance to get her feet wet while not expending too much energy. In the fourth round however, she could meet Jelena Jankovic. Jankovic has found her game again so far this year but it would it would be asking her a lot to take out Azarenka on grass. On the opposite end of this quarter, the other top seed is 2011 Wimbledon champion Petra Kvitova. Kvitova is a frustrating player to watch. She has the game to be the best player in the world and she has shown that her game translates well on grass. However she is so inconsistent and many have questioned her mental toughness. Azarenka will be hoping that she doesn’t have to meet Kvitova in the quarterfinals. The Czech has won their last four meetings, including that Wimbledon semifinal match in 2011.
Quarterfinals: Victoria Azarenka vs Petra Kvitova
Winner: Victoria Azarenka

SEMIFINAL #1
Serena Williams vs Agnieszka Radwanska
Last year’s finals went to a third set so it shows that Radwanska has a fighting chance. But how is she going to be able to neutralize the power of Serena Williams on a consistent basis? This could be another route for Serena – much like the one she dished out to Serrani in the French Open semis.
Winner: Serena Williams

SEMIFINAL #2
Maria Sharapova vs Victoria Azarenka
A rematch of the French Open semifinals and had this match been on clay then Sharapova would have been the safer pick. However this is on grass and although one would think that this should favor the Russian, it is Azarenka who has done better here the last few years.
Winner: Victoria Azarenka

FINAL
Serena Williams vs Victoria Azarenka
If there is one person on the women’s tour who does not seem to be intimidated by Serena, it has to be Azarenka. She seems to look forward to the challenge and most of their last few matches have been pretty tight, including last year’s semifinals (a 6-3, 7-6 Serena victory). She is able to hold up against Serena’s powerful groundstrokes and moves almost as well on the court. But the difference-maker, as always, is the serve of Serena and her ability to win easy points far more regularly than her opponents.
Winner: Serena Williams

Who will be the 2013 ladies' Wimbledon champion?