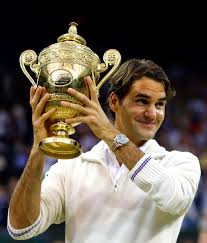 Unlike the French Open, there is no clear-cut favorite for this year’s Wimbledon men’s title.

One has to start with the Big 4, where each man has a legitimate chance. Last year’s champion Roger Federer looks primed for another run after winning yet another warm-up title at Halle, Germany. So too does 2012 runner-up Andy Murray after winning the warm-up tournament at Queen’s. Two-time champion Rafael Nadal looks to erase memories of his second-round defeat last year (which led to him being out for eight months), while Novak Djokovic (world No.1) looks to regain the title that he won in 2011.

An added twist to the men’s draw is the fact that Nadal is the fifth seed – to which I think is ludicrous! Even though fellow Spaniard David Ferrer is ranked ahead of Nadal, Wimbledon seedings are independent of the world’s rankings. Given that Nadal has been to five finals at the All-England Club (winning twice) and Ferrer has only made it as far as the quarterfinals just once (2012), it would have made complete sense to seed Nadal ahead of his countryman. Now the draw is even more open as this means that Nadal will have to play another member of the Big 4 (in this case Roger Federer) earlier than usual.

The question will be if anyone else outside the top four can capitalize.

Novak Djokovic’s Quarter
How can you not be happy if you’re the Djoker? Every other member of the Big 4 are on the opposite half of the draw! He should win his quarter of the draw fairly easily. Things could be interesting if he faces Tommy Haas in the fourth round. The 35-year old German has looked good (lost to Federer in the semis at Halle) and he has beaten Djokovic before. The top seeds in the opposite half of this section are the 7th-seed Tomas Berdych (who beat Djokovic at this venue in 2010) and the 9th-seed Frenchman Richard Gasquet, with a slight edge to Berdych being that it’s on grass.
Quarterfinals: Novak Djokovic vs Tomas Berdych
Winner: Novak Djokovic.

David Ferrer’s Quarter
David Ferrer just might be the Rodney Dangerfield of men’s tennis – no respect. Nobody (including perhaps himself) believes that he should be seeded ahead of Nadal and given that he’s only made the Wimbledon quarterfinals just once in his career, everybody believes that he is the most vulnerable of the top four seeds. Not that Ferrer minds. He’ll just keep going about his business like he always does. Given his draw, he should get through the first few rounds with relative ease. Possible fourth round opponents include the veteran German Philipp Kohlschreiber and the big-serving Canadian youngster Milos Raonic who should be due for a deep run in this tournament. Still, the steady Ferrer should be able to get by either opponent. The other top seed in this section is the big Argentinian Juan Martin del Potro who should also be expected to make the quarterfinals – though he could have his hands full with the young and talented Bulgarian Grigor Dimitrov (aka “Baby Fed”). Del Potro, who won Olympic bronze here last year, should fancy his chances versus the diminutive Ferrer and should be seeking revenge for his terrible lost to the Spaniard in the fourth round of last year’s tournament.
Quarterfinals: David Ferrer vs Juan Martin del Potro
Winner: Juan Martin del Potro

Roger Federer’s Quarter
Without a doubt the toughest quarter of the draw – and a tough break if you’re one Roger Federer. It’s likely that he more than any of the top four seeds was hoping to avoid having Rafa in his quarter (another reason why I think having Nadal seeded fifth is a terrible decision) given that he’s usually the one on the short end of their matches. Perhaps he could take some comfort in the fact that Nadal seems to have a tougher road to their inevitable quarterfinal meeting. None of the other top seeds in Roger’s half (Radek Stepanek, Jerzy Janowicz, Nicolas Almagro or Fabio Fognini) look threatening – although Nadal conqueror Lukas Rosol lurks as a possible third round opponent. Meanwhile Nadal could have some uncomfortable encounters with Igor Andreev (second round), Benoit Paire (third round) and then either 11th-seed Stan Wawrinka or 18th-seed American John Isner. Isner (much like Rosol last year) is the type of player that can upset Nadal – a tall player with a booming serve and a big forehand. However should Nadal make it to the quarterfinal and Roger’s on the opposite side of the net, he should be very confident. Roger will be hoping that the roof on Center Court is closed that day, as the sleek surface and controlled climate would favor his game. However that won’t stop Nadal from pounding away at his backhand side, even on grass.
Quarterfinals: Roger Federer vs Rafael Nadal
Winner: Rafael Nadal

Andy Murray’s Quarter
Murray resumes his annual quest of becoming the first British male to win Wimbledon since Fred Perry in 1936. Murray has done well dealing with the weight of a nation, making it all the way to the finals only to lose to Federer after taking the first set. His path to the quarterfinals looks pretty comfortable. The highest seed along the way is 14th-seed Janko Tipsarevic, who should not pose much of a challenge. Mikhail Youzhny and Tommy Robredo (who is better playing on clay than on grass) should not be keeping Murray up at nights. Murray’s biggest threat here is Frenchman Jo-Wilfried Tsonga. Tsonga has been to the semifinals the last two years, and he dismantled Federer at the French Open a few weeks ago. Outside of the Big 4, he may have the best shot at winning it all. Still though, Murray should feel some comfort in knowing that he has a 6-1 record against the Frenchman (in fact Tsonga’s only victory was back in 2008). He should also feel some comfort in knowing that Tsonga will have a tougher road to get to the quarterfinals starting with his first round opponent David Goffin, and then possibly Ernest Gulbis (second round), Julien Benneteau (third round – where he was up two sets on Federer last year), and Marin Cilic (fourth round).
Quarterfinals: Andy Murray vs Jo-Wilfried Tsonga
Winner: Andy Murray

SEMIFINAL #1
Novak Djokovic vs Juan Martin del Potro
Del Potro’s victory over Djokovic in last year’s Summer Olympics – at the All England Club – should not be ignored. If his big serve and power game is working del Potro has a realistic chance of duplicating that feat. However this will be his first Wimbledon semifinals and one has to wonder about his nerves at the beginning of the match. It could provide Djokovic a chance to race to an early lead – one that may in all likelihood be too difficult for the big Argentinian to recover from.
Winner: Novak Djokovic

SEMIFINAL #2
Rafael Nadal vs Andy Murray
Not a good matchup for Murray. He would much rather be facing Federer or Djokovic than he would the Spanish southpaw. Nadal has won a little over two-thirds of their matches. And in the Grand Slams, Murray only has one victory (2010 Australian Open) in a match where Nadal had to retire from because of a balky knee. This could be a match where the crowd (who really rallied behind Murray last year – both at Wimbledon and at the Olympics) comes into play and gives Murray that extra boost of adrenaline. One also has to wonder how much energy will Nadal have left following his match with Federer, which many expect to be a long, grueling affair.
Winner: Andy Murray

FINAL
Novak Djokovic vs Andy Murray
This is where Murray’s loss at this stage last year could benefit him this year. And unlike last year where the crowd really were undecided on who to support (Roger Federer just happens to be the most universally beloved tennis player on the planet), the crowd will be fully behind him. This will feel more like a Davis Cup match than a Grand Slam one. Murray will need that support because he may be running a little low in the tank after the semis. This is going to be a slug fest and it should be no surprise if this match takes as long as 3-4 hours. If that is the case, the home crowd support for Murray will be even more of a factor.
Winner: Andy Murray

Who will be the 2013 men's Wimbledon champion