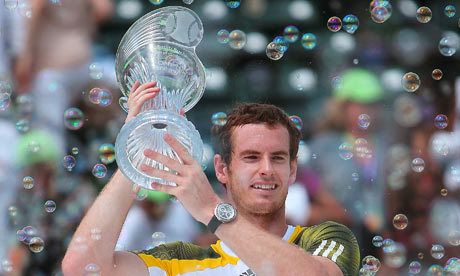 PREVIEW: Did Indian Wells revealed anything regarding the landscape of men’s tennis? On one hand, two of the Big Four made the finals (Novak Djokovic defeating Roger Federer in three sets – including a tiebreaker in the final set). However the other two (Rafael Nadal and Andy Murray) were upset before the quarterfinals. The Big Four have struggled holding back the rest of the field thus far in 2014 but perhaps Indian Wells was a sign that things were returning to normal in men’s tennis hierarchy. So what happens in Miami? Let’s preview the draw.

QUARTER #1: Top seed Rafael Nadal has not been himself since the Australian Open final  (he lost in the third round at Indian Wells to Alexandr Dolgopolov) and one has to wonder about that bad back. Let’s hope that his back received proper rest and treatment since his early exit in the desert because he is going to have to be at his best if he wants to advance from this quarter. Even with the withdrawal of No. 6 seed Juan Martin del Potro (due to wrist injury) there are still some dangerous names left. He could face one hard-hitting youngster in No. 19 Jerzy Janowicz in the fourth round and then another one in No. 12 Milos Raonic in the quarterfinals. The big-serving Canadian have the type of game that often gives Nadal trouble. Still, it is hard to see anyone topping what should be an extra motivated Nadal.
Quarterfinal: Rafael Nadal vs Milos Raonic
Winner: Rafael Nadal

QUARTER #2: Third seed Stan Wawrinka will be determined to prove that his fourth round loss at Indian Wells (his first of 2014) was just a bump in the road. If he were to emerge from this quarter, he will have to earn it. One name he should be wary of early on is No. 25 seed Marin Cilic, whose career has seen a resurgence in 2014 under the guidance of his idol and fellow Croatian Goran Ivanisevic. Those two would meet in the third round. Indian Wells semifinalist Alexandr Dolgopolov as well as German veteran Tommy Haas could also be possible fourth round opponents. If Wawrinka somehow manage to navigate a path to the quarterfinals, his possible opponent could be either another Indian Wells semifinalist, American John Isner, or the other top seed in this group, Tomas Berdych. Wawrinka is one of the fittest players on the ATP Tour but it might be asking too much for him to get through so many quality in-form players.
Quarterfinal: Stan Wawrinka vs Tomas Berdych
Winner: Tomas Berdych

QUARTER #3: There are two things working against Roger Federer, seeded fifth here at Miami. First, one has to wonder how much energy he has left in what has been a very successful past three weeks (victory at Dubai, finalist at Indian Wells). Secondly, he has not had much success at Miami thanks to the slow courts that are made even slower thanks to the humidity. However he has found himself a pretty good draw here and should make the quarterfinals.He would then most likely face the top seeded player in this quarter, No. 4 David Ferrer (although No. 15 Grigor Dimitrov could emerge here instead). Federer is 13-0 lifetime versus Ferrer.
Quarterfinal: Roger Federer vs Grigor Dimitrov
Winner: Roger Federer

QUARTER #4: The top two names here are defending champ and No. 6 seed Andy Murray (who recently split with coach Ivan Lendl), and No. 2 seed and Indian Wells champion Novak Djokovic. However Murray does not seem to be all the way recovered from his back surgery late last year and could be primed for a early upset. Should he meet Jo-Wilfried Tsonga in the fourth round, one would like the Frenchman’s chances. Djokovic on the other hand looked like he got his mojo back with the Indian Well title – his first of the year. Other than perhaps the mercurial Ernests Gulbis, there isn’t anyone who should concern the Serb.
Quarterfinal: Novak Djokovic vs Jo-Wilfried Tsonga
Winner: Novak Djokovic

SEMIFINAL #1: The conditions will favor Nadal in this matchup as Berdych’s groundstrokes won’t penetrate as much in the heavy atmosphere and slow courts. Berdych will have a tough time beating Nadal in these conditions, and Nadal rarely beats himself.
Winner: Rafael Nadal

SEMIFINAL #2: This will be the third meeting between Federer and Djokovic (Federer won in the semifinals at Dubai; Djokovic won in the final at Indian Wells) and like the previous two matches, this one should go the distance. The slower conditions will favor Djokovic who is far steadier from the baseline. Federer has also played a lot of tennis the past month so one should wonder how much gas will be left in the Swiss’ tank.
Winner: Novak Djokovic

FINAL: Assuming that Nadal has an easier semifinal than Djokovic, he should be favored in the final. However Djokovic should be the more confident (following his Indian Wells triumph) and the healthier player (Nadal’s back might still be an issue). Besides, the match is on hard-courts, and Djokovic is universally recognized as the best player on that surface. It should be another marathon affair between these two, but look for the Serbian to emerge the victor and begin his quest to regain the world number one ranking.
Champion: Novak Djokovic

Who will win the men's singles title at the 2014 Sony Open?

Miami Heat: From Eastern Champs, To Fighting For A Playoff Spot