Unlike many positions in fantasy football, the tight end position only has a hand full of solid fantasy football options. Jimmy Graham, Rob Gronkowski, and Tony Gonzalez were the three best tight ends in 2012 and are clearly in a league of their own. Last season Jimmy Graham took home the crown, but will he repeat or will someone else be the best?

Gonzalez is a future Hall of Famer and certainly deserves it. In 2012, he was targeted 124 times and had 93 receptions for 930 yards and 8 touchdowns. Gonzalez is not the threat he was five years ago, but this 36 year old can still play. Last season he finished third among fantasy football tight ends and with this year most likely his last season in the NFL, he could be looking to go out on a good note. With a talented cast around him, he may find it hard to get as many targets in 2013, but I wouldn’t rule him out to be the top tight in 2013.

Even though in 2012 Gronk had some troubles with injury, he still manged to be the #2 overall tight end in fantasy. He was targeted 79 times and had 55 receptions for 790 yards and 11 touchdowns. Even though Gronk may not be ready for Week 1, it seems he still has great fantasy value. This guy is one of the best red zone targets in the game and he proved that last season. If Gronk misses a few games in the beginning of the season he may have some work to do, but I still think he could be the top fantasy football tight end. 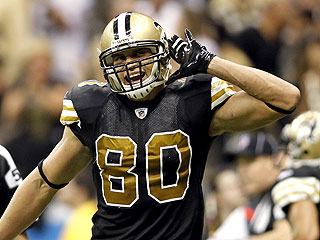 Image Courtesy of US Presswire

In 2012, Graham wasn’t at the top of his game due to injuries, but he still managed to put up great numbers. He was targeted 135 times and had 85 receptions for 982 yards and nine touchdowns. Graham could be ready for his biggest year yet. Offensive guru Sean Payton will be calling the plays and Graham is entering a contract year. Graham did have injury concerns in 2012, but with Rob Gronkowski sidelined with an injury for a while, it looks like Graham could take another crown.