Jadeveon Clowney Destroyed The 40 Yard Dash, Running It In 4.53 Seconds, .13 Seconds Faster Than Johnny Football.  Who Should The Texans Take First?

Alex: I’ve been saying this for awhile now, take Clowney.  Start to build a great defense, like the Super Bowl champs did, and get a QB later in the draft, like McCarron.  Manziel is not a franchise QB, he is just a player who will fill seats.

Chris: Alex lets be real here, Schaub is past his prime. The Texans need a young talent under center that will attract more offensive weapons. They already have a top tier defense and can address any holes that they need to fix later in the draft. He has an incredible amount of potential that the Texans would be fools not to take up. I hate comparisons, but he could be the next Russell Wilson.

Chris:. I agree, Clowney is a freak of nature and I’m not a big Manziel fan either, but I have a gut feeling about this.  Also, Bill O’Brien turned true freshman Christian Hackenberg into one of the best players in the Big 10.  So obviously he works well with young talented quarterbacks and I think we can see that correlate into the NFL with Johnny Manziel.

Alex: Chris it comes down to what the Texans want to be.  If they want to be a good team they will get Clowney, and McCarron later, or if they want to sell tickets and fill the stadium, they will take the unpredictable quarterback named Johnny Manziel.  Don’t forget that O’Brien is a new coach in the NFL, it will take him time to get adjusted to the speed of the NFL, so he will have his plateful, without having to groom a wild QB.

Dale Jr. Won The Daytona 500 After a Long Rain Delay to Snap a 55 Race Losing Streaking Dating Back All The Way To 2012, Is He Back?

Alex: Last year he raced really well, and was competing for the Sprint Cup, but never could win a race.  I think this win gives him a boost going into the season.  So yes I think he is back,  though he never really left, and will compete with Johnson, and in the end keep him from the repeat.

Chris: I feel like we’re having the Tiger Woods discussion all over again.  One win does not instantly bring someone back from a slump, especially in a race that had a six-hour rain delay. To officially “be back,” Dale is going to have to follow this win up with a string of solid races and high finishes.

Alex: Yes, but he raced well last season he just couldn’t get that win.  He may not win again but he will finish in the top 10 almost every race and I think winning a big race like that helps him in the points standings.  I see the Tiger Woods comparison, but I think it is two very different situations.

Barry Bonds Will Be Attending the San Francisco Giants Spring Training Camp As A Guest Instructor, Are You Okay With This Knowing His Past Usage With Steroids?

Alex: I dislike Bonds greatly.  He cheated the game to get one of the most prestigious records in the game, so I am not okay with this at all.  Who’s to say he was a good hitter at all?  We don’t know if his mechanics were any good, because he only hit for power and the steroids gave him that power.

Chris: As much as I hate this whole situation, I am okay with this.  There is nothing that Bonds can do now to fix what he did in the past, but being a guest instructor at spring training is a start. It shows that he cares about the success of the franchise and is concerning his time with someone other than himself.  Even if this is just an act to try to prove to the Hall of Fame voters that he is Cooperstown worthy, I would like to see him do more good.

Alex: I couldn’t disagree with you more Chris.  This looks like a pity way to get back into the game and try to wipe his name clean of the steroid usage.  This should have no impact on his Hall of Fame voting, because he shouldn’t be allowed in Cooperstown, and if he is let in, Pete Rose better be on the next ballot.  If someone who used to bet on his team isn’t allowed back into a stadium, someone who by all accounts “cheated” the game, shouldn’t be allowed either.  The MLB is showing a double standard here.

Chris: He will never fully wipe his name clean, but the least he could do for the game of baseball is to give it an honest effort instead of sitting around and not even trying.  I’m not saying he should ever be allowed in the Hall of Fame, but for the integrity of the game, he should try to make a good name for himself.

Questions From the Fans 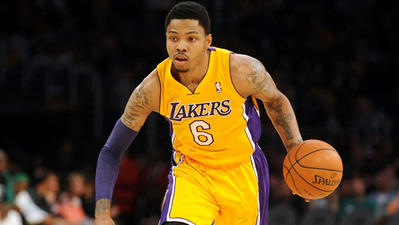 courtesy of the LA Times

Terry – An ODU Fan  (VA):  Is Kent Bazemore The Spark That The Lakers Need Until Kobe Bryant Returns?

Alex: Kent Bazemore has been playing very well since he got traded to the Lakers, partly because they are actually playing him, but to say he is will provided the spark for the Lakers to mount a comeback is asking a lot.  Being the worst team in the West, they have a lot to overcome, I don’t even think Kobe could pull them out of this hole right now, but Bazemore will do a much better job at making the team better than Nick Young a.k.a. “Swaggy P”. Am I right Chris?

Chris: Agreed Alex.  Nick Young is exactly what his last name suggests: immature. As a Wizards fan, I wasn’t fond of Young and his antics.  Bazemore needs to learn from Young’s mistakes and be the spark they need while keeping his mouth shut. If he does that, I have no doubt he will succeed.  As far as being the spark to bring the Lakers back into playoff contention, there is no way.  The Lakers are just too far out of playoff contention for Bazemore’s contributions to make a difference, and his efforts are certainly not going to go unnoticed.

Remember, send us your own questions for next week:

Fading Purple and Gold: The Lakers are Losing, Again

Are the Lakers 2017 NBA Playoffs Bound?