His NFL-record five MVP awards, as well as the mind-blowing stats he has accumulated over his career (one in which he will end up owning several major passing records) is further confirmation to this claim.

However there’s a reason why I did not put Peyton Manning in my top five when Sports Unbiased asked us to list our Top QBs of All-Time before the 2013 NFL season.

I expect more from Manning and so far he hasn’t delivered.

When your name is being mentioned as part of the “Mount Rushmore of NFL Quarterbacks,” when people are on the radio or television seemingly every day saying how you could go down as the greatest of them all, then I am going to hold you to a higher standard.

And for me, Peyton Manning has underachieved when it mattered most. For all his greatness, we have seen him (and his team) come up small on too many occasions.

He underachieved in college at Tennessee. Sure, he put up great numbers (his 89 touchdowns and 11,201 yards are school records), won lots of games (39-6 overall), and numerous awards (excluding the Heisman).

But then he couldn’t beat Florida. He won the SEC Championship just once during his four years as a starter. His team got railroaded 42-17 by Nebraska in the Orange Bowl when a win (and a Michigan lost to Washington State in the Rose Bowl) would have given the Vols the national championship in his senior season. 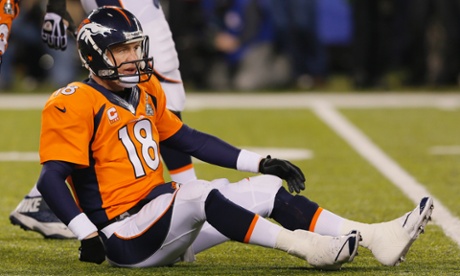 Manning has a 11-12 postseason record. His 12 playoff losses are the most in NFL history (Getty Images)

Last night’s humiliating 43-8 loss to the Seattle Seahawks in Super Bowl XLVIII was yet another example of the quarterback not getting it done when he had to. Losing is one thing, but can someone explain how the highest scoring offense in NFL history gets held to a measly eight points?! Things were so bad that by the second quarter Manning had the look of a defeated man – with the droopy face and the bad body language to boot.

Of course, the Peyton apologists (and believe me, there are many) will try to explain that it’s not all his fault, that football is the ultimate team sport, that he didn’t have enough help, that he never had a great defense, blah, blah, blah… Mind you, these are the same folks who hardly mention that his teammates have to get open and make all those catches.

But given all those reasons, shouldn’t we still expect better than a 11-12 postseason record? Shouldn’t we expect more deep playoff runs when your teams are continuously winning divisional titles and number one overall seeds during the regular season? Eight times in his postseason career, Peyton Manning has been one-and-done (five of those eight losses came at home). Shouldn’t we expect some of those great regular season stats to carry over into the postseason? Shouldn’t we expect the biggest star to shine brightest on the biggest stage? Peyton Manning is now 1-2 in Super Bowls (and that one win was against a team with Rex Grossman as its starting quarterback for crying out loud), has never thrown for more than one touchdown in a game, has thrown for more interceptions (four) than touchdowns (three), and has thrown a pick-six in each Super Bowl loss.

Brady (left) has had the better of Manning during their illustrious careers, with 10 wins in 15 meetings (SI)

I sometimes wonder if I’m being too harsh on Peyton – until I remember how other great athletes like LeBron James or Alex Rodriguez were being chastised for not getting it done in the postseason despite numerous MVP regular seasons (well, at least until LeBron started actually winning championships). I don’t recall too many folks coming to their defense. And last I checked, baseball and basketball are team sports just like football.

On a side note, why is it that so many people are so quick to defend Peyton Manning’s status as an all-time great quarterback? Perhaps it’s because he is seen as a humble superstar and a nice guy. Or because he is such an ambassador for his sport. Or because of his last name. Or because he does so many funny commercials.

Whatever the case, the campaign to place Peyton Manning as the greatest quarterback ever (many were more than willing to proclaim him as such had he won the Super Bowl last night) has to stop. This is by no means a knock against Peyton. I am not disputing that he is one of the greatest quarterbacks to ever play the game. How can you with all what he’s accomplished? But let’s not make it more than what it should be. At this point of his career he has not shown that he belongs in the class of a Joe Montana or his boss John Elway. He has not even proven that he is undoubtedly the best quarterback of his era (oh yeah, that Tom Brady guy) much less the best quarterback of all-time.

It’s time to accept Peyton Manning’s legacy for what it truly is: unparalleled greatness in the regular season followed by shortcomings in the postseason.

In other words not a legacy of one who should be considered for greatest quarterback of all-time.