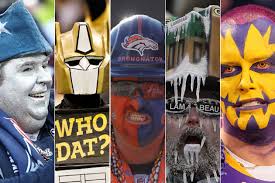 NFL fans are classified as some of the craziest fans of all sports. These fans are willing to bear the weather just to watch their team. It doesn’t matter if it’s 110 degrees in Texas or eight degrees and snowing in New England, you will always find NFL fans anytime of the year in any weather rooting for their team, however, when does passion go too far? In the past few years around the NFL there have been key incidents that make me question, how far is too far? Throughout the years there have been several fans killed around the league, death threats to players, and more.

One incident was when Brandon Jacobs took a screen shot of a death threat he received from a fan that had him on his fantasy team. Jacobs wasn’t able to play in the game due to a lingering injury and the fan was outraged that he wasn’t able to help his fantasy football team gain points. The fan took to social media to threaten Jacobs for the whole world to see. There was another incident where a fan decided enough was enough and visited Matt Schaub’s residence to confront him. Another fan decided to take pictures of Schaub’s family and post them on Facebook. Schaub called police but the individuals left before the police arrived. Certainly any NFL fan knew Schaub was having trouble during the season but was it enough to approach him and his family?

Both incidents should leave a bad taste in your mouth. I am a huge NFL fan and of course I get frustrated when my team loses or a guy on my fantasy football team drops a goose egg. I could never imagine negatively tweeting or confronting an NFL player just because of their struggles on the field. Sure these guys are supposed to be professionals and the best of the best, but doesn’t everyone have an off day? I am sure most of us can say there have been days at work where you just aren’t at the top of your game. Others may notice it but do they confront you with death threats? Some fans have definitely taken sports too far and need a reality check. Whether it’s an NFL player or another athlete, these players are doing their job. Did they once think that maybe that day somebody else was better at their job than the other player? Certainly we can understand this, right?

There are constant examples of fan fights because one fan said something bad about the other fans team. Of course, I am not fond of the New York Jets but I listen to their fans’ opinions, no matter what they say. After all, if it weren’t for the Jets fans or the other fans, who would you smack talk after your team wins? Fans are what make the game what it is today and just because another fan makes a bad statement about your team, it doesn’t mean you should go off and physically attack them. They are just showing their passion for their team just like you do.

Fan violence isn’t just an NFL issue, it happens in every sport all over the world. In every sport there are crazed fans that always seem to take things overboard. These type of fans need to wake up; this is real life and not some fantasy world. These athletes have families just like we do. They put their pants on the same way we do and just like us; they have a job to do. So next time you want to go off the walls and threaten a NFL player or any athlete, think first.

Think about the last time you had a bad day, or the last time you didn’t perform up to standards. Did anyone confront you? Did anyone get in your face and threaten the lively hood of you or your family? Fans like this make a bad rap for the rest of us and most certainly don’t deserve to be fans if they can’t control themselves.