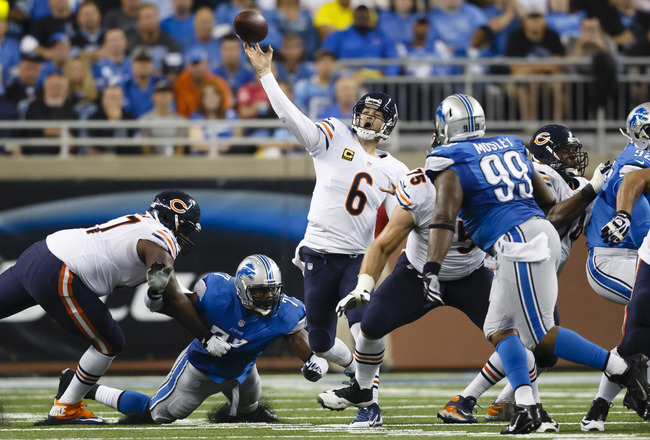 Keys to the Game

Detroit: Over the last four match ups versus the Bears, Calvin Johnson has had 19 catches, 231 receiving yards, and a lone touchdown. For a guy who just had 329 receiving yards in one game, many would expect better stats. Now if the Lions want to win they will have get Johnson involved but their focus should be getting that rushing attack back. Reggie Bush and Joique Bell could have a huge day. The Bears defense is giving up an average of 127 rushing yards a game. The Lions need to run the ball and take all the pressure off the passing game for once.

Chicago: The Bears are looking for back to back wins and to take control of the division. However, they are still uncertain who will be their quarterback in week 10. There is talk that starter Jay Cutler may be able to return, if not they will continue to go with Luke McCown. However, the offensive side of the ball isn’t the biggest concern for this game. The offense is ranked second in the NFL averaging 30 points a game. But the focus should be on the defense. When you think about the Bears you think about a strong defense, but this year this hasn’t been the same defense we are use to. The Bears will need to focus on stopping Calvin Johnson and that 2nd ranked passing offense.

What to Watch for

Detroit: Will the “Heisman” Reggie Bush show up? Sure it’s been quite sometime since Reggie Bush had his Heisman, but either way he was a stud back then. This season he has been doing great things in Detroit, but this could be another big game for him. I am looking for Bush to have a huge day. The Bears are giving up to many yards on the ground and Bush is too talented not to exploit them at some point.

Chicago: Can Alshon Jeffery continue his success? Jeffery has been a huge help for the Bears this year. In his last five games his has topped the 100 yard receiving mark three times. Now, he isn’t Brandon Marshall yet. I say “yet” because he certainly is becoming a good young wide receiver. His size and speed help him beat defenders and he kind of reminders me of a young Brandon Marshall, just not as cocky.

This division match up is the game of the week. Both teams are looking to stay at the top of the NFC North but it won’t be easy. Matt Stafford will be looking to get on the scoreboard quickly and he will be looking for his main man Calvin. The Bears are hoping Jay Cutler will be back, but if not they will rely on the rushing efforts of Matt Forte. Either way, this game will prove to be a good one, but only one team can win (unless there is a tie and I doubt that).