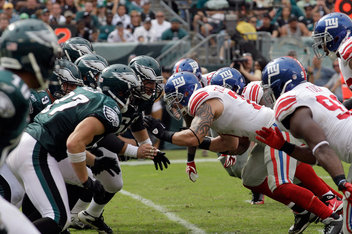 New York: The Giants have been just downright awful this season and it won’t get any easier as they face the Eagles this week. If the Giants want to win they need a way to move the chains. Yes, Eli Manning will be throwing to his targets and getting first downs, but they need to find a rushing attack. Currently, Brandon Jacobs is questionable for the game and if he can’t go they will have to rely on Peyton Hillis. The Giants have been pitiful at running the ball this season but if they want to win they need to stop relying on Eli to make all the plays (even though he really hasn’t made that many plays).

Philadelphia: Chip Kelly had Eagles fan’s believing after the first week. The offense looked great, things were clicking on the defense – but a lot has changed. The biggest problem has been the rotation of quarterbacks due to injury. Michael Vick claims he will play and the Eagles coaches and fans are hoping he can play as well. However, I don’t think the Eagles will need to worry on offense too much as they are facing a low ranked Giants defense. The Eagles really need to stop the passing attack. As I stated earlier the Giants have been awful rushing the ball, and if the Eagles can stop the passing attack and shutdown Victor Cruz and Hakeem Nicks, the Eagles will be 4-4.

New York: Prince Amukamara and Antrel Rolle are the guys I am looking at. These guys will be facing DeSean Jackson, who has been shredding secondaries all season. These two guys will be responsible to shut down the Eagles number one target and limit the big plays. It won’t be easy, but if the Giants want to turn this season around, Amukamara and Rolle need to step up.

Philadelphia: I am looking forward to watching the Eagles defense put pressure on Eli and the offense. So far this year no one as really stepped up as the Eagles “sackmaster” but they certainly have a number of potential players who are capable of it. Connor Barwin, DeMeco Ryans, Vinny Curry, and Fletcher Cox are just a few guys that have been putting pressure on quarterbacks this season. Look for one of these guys to have a break out day and get a few more sacks.

This is a huge rivalry and it should be a hard hitting game. However, I just don’t think the Giants are ready for the Eagles. After watching the Monday night game, the Giants struggled against the Vikings at times, and that’s not a good thing. So I have to go with the E-A-G-L-E-S!