The Buffalo Bills offense have certainly had their fair share of injuries throughout the season. So far this season, Buffalo has had three different quarterbacks play for them. EJ Manuel, Thad Lewis, and Jeff Tuel have all appeared in games for Buffalo.

EJ Manuel is clearly the fan favorite of the three and still the starter when he returns from injury (for right now…more to come below). Jeff Tuel had a great preseason but when his number got called versus the Cleveland Browns, it looked like he didn’t have the tools for the job. Last but not least there’s Thad Lewis. Lewis has been tossed around from team to team but hasn’t been bad for Buffalo and even led them to a win against the Miami Dolphins.

Yes, I know these three quarterbacks aren’t Tom Brady or Aaron Rodgers but Buffalo is finding ways to be competitive and win games. Many analyst wouldn’t have believed Buffalo would be sitting at 3-4 at this point in the season, let alone being 3-4 while having played three different quarterbacks. However, the Bills quarterbacks are proving the doubters wrong and showing they can win games. 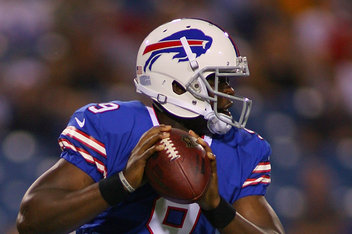 Now lets go back to my comment about Manuel being the starter for now. I have read several comments on Twitter, Facebook, fan forums and more where Bills fans are asking the following question. If Thad Lewis continues winning games, should EJ Manuel be the starting quarterback when he returns? Well I know how I feel about this question but I am here to bring you the facts. So instead of just giving you my opinion I decided to do a statistically analysis from each game. Below you will see each quarterback’s stats, for each game they have appeared in this season.

Now, we all know Jeff Tuel is a work in process, but when you look into the numbers of Manuel versus Lewis you see that the numbers are relatively close. Lewis has a better quarterback rating of 85.3 and Manuel has a rating of 79.4. Also, Lewis has a completion percentage of 62.5 percent compared to Manuel’s 56.7 percent.

However, both Lewis and Manuel are even when it comes to wins and losses. Lewis has only played two games and is 1-1 and Manuel has played four games and is 2-2 (excluding Cleveland due to injury). You can see both quarterbacks are close when compared on paper but the fact that Buffalo went out and drafted Manuel in the 1st round this off season is the deal breaker. Buffalo can’t afford to sit Manuel when he is healthy. It will only show that the organization made a mistake taking Manuel so early in the draft. And two hurt his confidence early in his young career.

Bills fans have to realize this is Manuel’s team and he really hasn’t done anything to lose his job at this point. Now I know fans will continue to talk, but I believe everyone should wait until we see how Lewis does in the next two games. If Lewis can somehow work some magic and beat the New Orleans Saints or the unbeaten Kansas City Chiefs, maybe, just maybe Bills fan’s can entertain this idea of Lewis replacing Manuel.