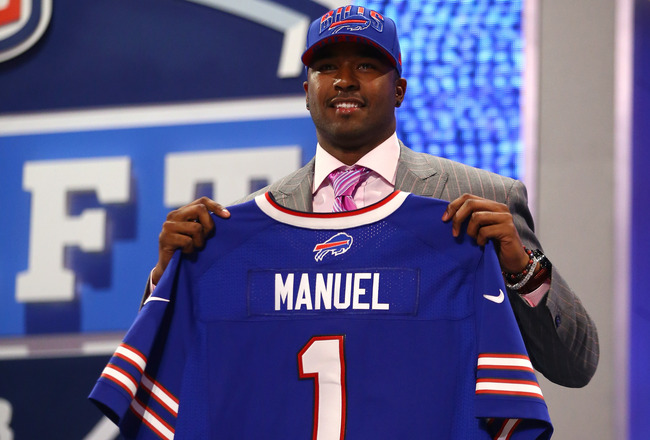 The Bills have had their fair share of draft class duds; Aaron Maybin, J.P. Losman, John McCargo, Mike Williams, and Erik Flowers just to name a few. However, the draft class of 2013 has already shown why the Bills decided to draft them. These guys are turning heads and this might just be the best draft class Buffalo has had in my lifetime. Lets take a closer look at this draft class.

It’s no shock to many people that Manuel was named Buffalo’s starting quarterback for week one and he is still the Bills starting quarterback (once he returns from injury). Manuel has had a decent rookie outing thus far. Throughout the five games he has played Manuel’s completion percentage is 56.7, 985 passing yards, five touchdowns and three interceptions. Yes folks, the numbers aren’t outstanding but fact that he has gone against multiple top ten defenses and is a rookie on a young Bills offense shows he has room to grow. However, upon his return Manuel will have to show fans and the Bills a little more on the field.

Woods has been impressive in just six games. He has been the starting #2 wide receiver behind Stevie Johnson and also has played as the #1 wideout in Stevie’s absence. Woods has 274 receiving yards and two touchdowns. He is averaging 15.2 yards a catch and has a great chemistry with rookie QB EJ Manuel. Woods is still young but he has really stepped up. Buffalo has a young wide receiver corps, and Woods will need to continue his strong play to help them out.

I don’t even know where to start with this guy. Alonso has taken Buffalo and their fans by storm and is clearly a fan favorite. When playing in Ralph Wilson Stadium fans are constantly screaming Kikoooo! But let’s face it Buffalo didn’t draft him for his fan appeal, they drafted him to play and playing is just what he does. He currently has 66 combined tackles (leading the league), four interceptions, one sack, one forced fumble and one fumble recovery. As you can tell, Alonso is definitely in the running for Defensive Rookie of the Year.

Flash, as many people know him, has been injured. However, as the #3 or #4 wide receiver Flash has already made a difference. Last week versus the Bengals he caught the game tying touchdown. Now, he only has four catches thus far and 51 yards but this guy is a difference maker and it shows. His speed was killing the Bengals and teams are going to have a hard time stopping him once he gets use to the NFL a little more.

He has appeared in all six games but really hasn’t made a huge difference yet. Williams is a development player right now. As he sits under players like Jairus Byrd, he is going to learn more about the game and some great technique. I don’t know if Williams will ever pan out to be a great player but he will be a good sub eventually.

Hopkins showed off his leg power and accuracy in the preseason, however, Hopkins injured himself and has now been put on IR. Hopefully next year we will see why the Bills drafted a kicker in the sixth spot and made Hopkins so special.

Grade: Undetermined went on IR, but if I had to I would say a C+

Gragg has only played one game and isn’t very high on the depth chart. Gragg finds himself behind Scott Chandler and Lee Smith. Gragg is a player that the Bills will try to develop. With his speed he does fit into the offense Buffalo wants to run, so he might see the field a little more once he is more consistent.