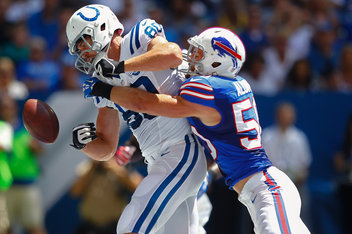 Kiko Alonso was the 46th pick in the 2013 NFL draft. Many scouting analysts didn’t think Alonso would go until the fourth round but Buffalo took a gamble and selected him in the second round.

However, Buffalo decided to take a huge risk on a player that had a lot of issues. Fans were hoping all the analysts were wrong and that Buffalo didn’t make another draft day mistake. However, just four games into the season it seems that Buffalo might have actually got this one right. They wanted a player that could make an impact and become a starter right away, and Alonso is doing just that. In four games he currently has 32 combined tackles, one sack, one forced fumble, and one fumble recovery. Oh and lets not forget he is tied for first in interceptions, with four. He certainly has been a pleasant surprise in Buffalo and Alonso is becoming somewhat of an icon as well.

Fans have been flocking to buy his jersey which are sold out at the Buffalo Bills store, but even more impressive is he is trending on Twitter. Fans have been using #TheLegendOfKikoAlonso on Twitter to show their appreciation. Here are some examples:

“When the #Bills were up for the 46th pick of the draft, Kiko called THEM to inform Nix he’d be joining the team. #TheLegendOfKikoAlonso” tweeted Dan Jaromin

“Kiko Alonso does not wear a watch, he decides what time it is. #TheLegendOfKikoAlonso” tweeted Ryan Mallon

Now Kiko is a long way away from being a NFL legend and fans know that. Although, the first step to becoming a legend would be to win Defensive Rookie of the Year. He certainly is making a strong case for it thus far, but it’s still early so don’t jump to any conclusions.