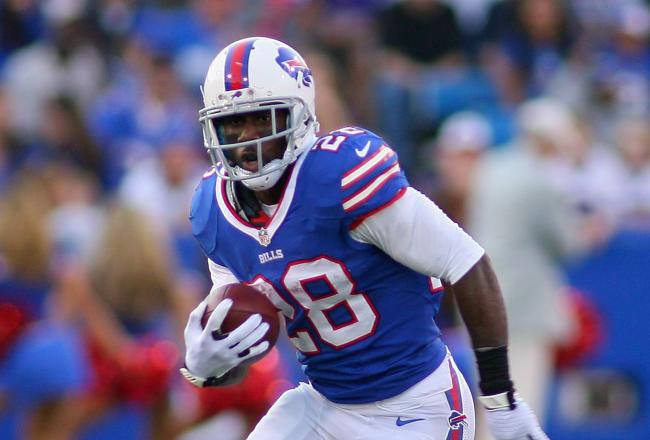 Last year the NFL saw bursts of speeds, unbelievable runs, and a guy who looked to be the next Chris Johnson. Yeah I am talking about C.J. Spiller, however, in just one year a lot has changed including his great stats. Spiller is just averaging a mere 3.6 yards per carry and has zero touchdowns in three games. At this point last year Spiller was averaging 9.3 yards per carry and had three touchdowns (this also includes a game where he got four carries due to injury). That’s quite a difference from last year to this year, so what has changed?

Well for starters defenses are planning to stop Spiller this year. When Spiller is in the game the defenses are stacking the box to make sure this guy doesn’t gash them for a big gain.  So far through three games teams are determined to shut him down. After getting shut down by the New England Patriots, Spiller stated,

“Now, I kind of get a feel for what Adrian Peterson faces week in and week out….When teams come in and stack the box, that’s a sign of respect”

Spiller should expect this game in and game out, teams got a glimpse of what he could do last year and they are going to do everything to make sure he doesn’t bust out a big run this year. However, if Spiller is the talented runner we all think he is, he better get use to this and figure out how to deal with or his 1,000 yard season are long gone.

Secondly, new offensive coordinator Nathaniel Hackett has changed the playbook. Last season Spiller was used in spread formations, I-formations and even as a receiver. Spiller sees some of those formations today however, most of his rushing attempts have been from the read option. Yeah it seems to be sweeping the NFL by storm. With a quarterback like EJ Manuel the Bills have the ability to do the read option, however, Spiller seems to be hesitate and indecisive about the plays. His back up Fred Jackson has seemed to be able to run the read option more effectively. If the Bills want to get their running game back where it was last year they better do something quickly. Whether the Bills have Hackett cater to Spiller’s strengths or Spiller learn how to effectively run out of the read option something must be done.

Lastly, the offensive line as been horrific thus far this season. The Bills offensive line have been getting manhandled and the worst came in week three versus the Jets. The Jets defensive line was determined to shut down Spiller and created run blitz schemes which disrupted the timing of the handoff and closed the running lanes. Also, they performed bull rushes to move offensive lineman into the backfield to create an extra obstacle for Spiller to avoid. The offensive line must play better if they want a better rushing attack, and if they want Spiller to show his true potential.

Overall, Spiller has been frustrated this year and it has shown, but it has only been three weeks and there is a lot of football left to play. Spiller is a the type of back that can change a whole game and he needs to find his rhyme sooner than later. If Buffalo wants to prove they are contenders and get back to the playoffs, he is key component they are counting on to help them.