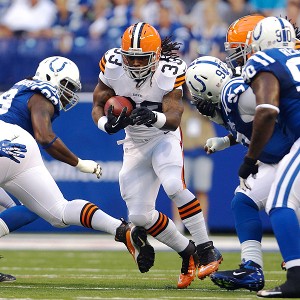 This might be the most shocking news I have heard from the NFL in years. The Cleveland Browns have traded running back Trent Richardson to the Indianapolis Colts. The Colts sent their first-round draft pick of the 2014 draft to Cleveland in exchange for the talented Trent Richardson.

The Browns drafted Richardson 3rd overall in the 2011 draft. When they drafted Richardson, Cleveland fans and the NFL world knew they finally had a running back they could build an offense around. Last season, Richardson rushed for 950 yards and 11 touchdowns and did everything the Browns wants him to. However, new head coach Rob Chudzinkski and the Cleveland front office have different plans. The Browns organization is looking for a different type of running back, and will hopefully find one that is just as talented as Richardson.

Overall, you don’t often see these trades in the NFL, however, this trade does tell you somethings about each team. The Cleveland Browns are looking to completely rebuild through the draft in the upcoming seasons. The new organization seems to be cleaning house and looking for fresh talent. And as for the Indianapolis Colts they building a championship team. The Colts had a star studded offense all ready and now they add a very talented running back in Trent Richardson.

The Showdown In Sun City: The Super Bowl That Shouldn't Be

NFL: Teams with over $30 Million in Cap Space Available