In 2012, football fans saw quarterbacks from many teams do great things. Drew Brees set a passing record, Tom Brady was typical Tom Brady, Russell Wilson took Seattle by storm, Peyton Manning showed us he can still play (even in Denver), and Kaepernick showed the West Coast how it’s done.

As most of us know, in the fantasy football world there seems to be a few favorites when it comes to selecting a quarterback. Aaron Rodgers, Drew Brees, Peyton Manning, Tom Brady, and Cam Newton are usually the first five quarterbacks picked from the list. Last season Drew Brees took home the title of being the best fantasy quarterback. Brees put up crazy numbers and it only seemed right for him to be number one at the end of the year, however it’s 2013, a new season,so the question is can Brees hold on to the title or will one of the other quarterbacks take home the crown?

Rodgers looked like he was going to repeat as top fantasy quarterback in 2012, but Brees took his title away. The season hasn’t even started yet and Rodgers seems to be faced with challenges already. The Packers have had some key injuries. One of Rodgers favorite targets Jordy Nelson is out 4-6 weeks. Also, the offensive line is banged up, and that’s not good news because even when the offensive line was healthy, Rodgers still got sacked 51 times last season.

Rodgers got knocked around more that enough last season yet he still managed to put up 39 touchdowns. This season he still has some pretty good weapons like Jermichael Finely, James Jones, and Randall Cobb. Nelson will hopefully find his way back onto the field quickly. Rodgers has a good shot to regain his title but he needs to stay upright in order to get the job done.

Brady seems to be at his best even when his team is at their worse. The Patriots had a rough off season, Gronk had several surgeries, Hernandez was arrested then released from the team, and Wes Welker signed with the Broncos. For Brady and the Patriots it seems like it may be a bumpy road this year, but let’s not forget this is Tom Brady. The Patriots did bring in Danny Amendola this year who seems to be a rising star at wide receiver but he needs to stay healthy. The team also drafted a talented wide receiver from Marshall, Aaron Dobson. During his college senior season, he was the recipient of 92 targets without a single dropped pass. Brady has to appreciate having a guy who doesn’t drop passes often. In the long run, Brady is going to have to work very hard to be the top fantasy quarterback. 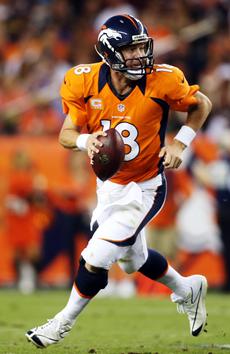 When Manning got traded to Denver, most people thought he wouldn’t perform like the old Manning but he proved us all wrong. Manning threw for 4,659 yards and 37 touchdowns in 2012. He has great weapons like Demaryius Thomas, Eric Decker, and now Wes Welker. Manning may have the best wide receiver corp of his career but can he be the best quarterback? Last season the Broncos passed 55.01% of the time. That number is actually pretty low for a team who has Manning leading it. I would expect that number to rise this year now that they have more weapons. Manning is a dark horse to steal the crown away from Brees but it won’t come easy.

Compared to the other quarterbacks on this list Newton is a different beast. Newton only had 19 touchdowns last season, which you may be asking yourself, why is he a top five quarterback? What he brings to the game is rushing ability; Newton rushed for 741 yards and had eight touchdowns in 2012. Many fantasy players are worried about an injury with a rushing quarterback, but Newton is much larger than RGIII or Michael Vick, he is a solid 6’5’’ 245 lbs. In the passing game he has one clear weapon and that is Steve Smith. I don’t expect large numbers again from him passing but I would expect 10 rushing touchdowns this season or more. Newton is a sleeper pick for me to be the top fantasy quarterback, he has the skills and if he could just get the passing stats up, he could have a shot.

Brees is the reigning champ and looks poised to have another strong year. Last season the Saints threw 64.46% of the time. Brees threw for 5,177 yards and 43 touchdowns. The reason the Saints passed so much is because the Saints defense couldn’t stop teams from scoring. If the Saints defense is better this year, the Saints offense can rely more on the running game and won’t pass as much but their passing numbers could still be high. With weapons like Jimmy Graham, Marques Colston and Lance Moore, Brees should have another solid year. Its hard to envision anyone knocking Brees out of the top stop this year but crazier things have happened.