Tonight is the rematch fans have been waiting for since the overtime thriller between Syracuse and Duke at the Carrier Dome. At 7:00 pm EST, the teams face off in what could be a preview of the national championship this season. In their last meeting, Duke and Syracuse provided us with one of the best games in recent memory. It featured lead changes, a clutch three in the closing seconds of regulation, and the largest crowd the Carrier Dome has seen during a regular season game. You can bet that tonight’s game will likely feature a similar environment.

Cameron Indoor Stadium, Duke’s home arena, is one of the loudest and most raucous venues in college basketball, and with the magnitude of this game, there is no doubt the Cameron Crazies will be out in full force.

Both teams are coming off losses that hurt. Duke fell to their in-state rival in North Carolina after surrendering a seven-point halftime lead. While the loss did come on the road, there is always a bad taste left after falling in those types of games. Syracuse on the other hand, lost at home to a Boston College team who had only won two ACC games up until that point. This could have been a case of looking past an opponent with the Duke rematch looming, but no one believed that this would be the game Syracuse would suffer their first loss of the season. 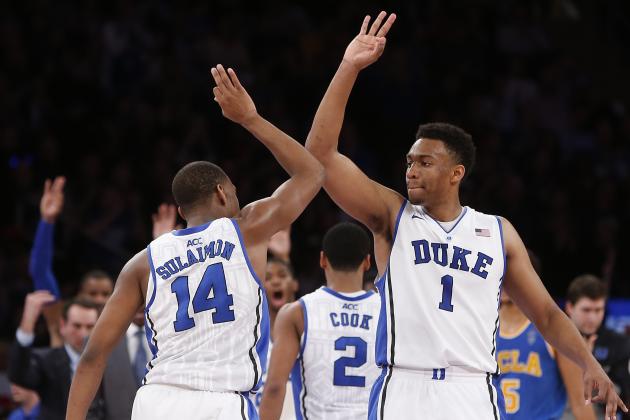 While it would have been interesting to see this game with Syracuse trying to hold on to their perfect season, the fact that both teams are coming off losses could actually make for a better game. First off, they are both hungry for a win. Now that the pressure of being undefeated is off the shoulders of the Orange, they can play free. They were due for a loss after using a few last second heroics to keep their record untarnished. A win tonight could further validate an already impressive resume. It would likely guarantee a top seed in the NCAA tournament, barring an end of the season collapse.

For Duke, they don’t want to fall farther down the ranks of the ACC. They are tied with North Carolina in third place, so they need to maintain their position in the conference. Duke is also still vying for a top seed once the NCAA tournament rolls around. They are the fifth ranked team in the nation – which could be lower after their loss to UNC – which means they need to stockpile some big wins if they want to stay in consideration for a one seed.

The most interesting part of tonight’s match-up is what the game could mean for the relationship between these two teams going forward. A great conference rivalry is in the making right now. Two dominant programs headed up by two of the best coaches of all time. Mike Krzyzewski and Jim Boeheim are one and two respectively on the list for most wins by a men’s college basketball coach. Depending on how the brackets play out, Duke and Syracuse could meet four times this season with the ACC and NCAA tournaments. If this is a sign of things to come, it will make for some great college hoops. Not to discount North Carolina, but they haven’t been as dominant as they were in the past. Duke and Syracuse could provide a great rivalry outside of the state that would do great things for the sport.

This game has all the makings of a classic. I know exactly what I’ll be doing come tip-off.

The Rise of Duke's Grayson Allen