A week removed from Marcus Smart’s recent outburst against a Texas Tech fan, there have been talks about how this incident will affect his draft stock for this year’s draft. Last year, Smart was a top NBA prospect who was slated to go anywhere in the first three picks. At the time, he showed number one overall talent, but with the Cleveland Cavaliers owning the number one pick, Smart would have likely fallen to the Orlando Magic with Kyrie Irving holding the point guard position for the Cavs. Smart was one of the few bright-spots in a much diluted draft, yet he decided to return for his sophomore season.

This season has been a roller coaster for Oklahoma State, and Smart has seen his fair share of highs and lows. Led by Smart, the Cowboys began the season on a tear, going 15-2 in their first 17 games. Smart was dominating games and the talks of his NBA potential were at an all-time high. Even after a scene of Smart kicking his chair in frustration in a game against West Virginia, he was a big-talent, great-character prospect that had many teams excited about the possibilities.

Fast-forward to February 8th against Texas Tech, scouts have raised questions about his NBA future. With less than 10 seconds to go in the game, Smart fell into the stands after a foul on a breakaway layup attempt. Smart’s frustration was evident, but there was no sign of trouble on his initial fall. As he is about to stand, Smart abruptly turned to a fan and began yelling in his face. Then came the shove seen far and wide by the basketball community. There have been speculation of what the fan may have said to Smart – possibly directing a racial slur toward the Oklahoma State guard – but he still reacted in a way that justified his eventual three game suspension.

Some are now questioning Smart on talent and attitude levels, and his move to stay in college could prove to be a mistake.

“He has shown in the past few months that he is prone to outbursts. The team is not doing well, struggling,” said one NBA general manager.

He is an emotional player that may have some difficulties staying calm under the criticism of players, fans, and the media. How will Smart react at the next level when there will be hostile comments at almost every turn?

That is left to be seen, but it doesn’t mean teams should pass on Marcus Smart. Even with the team’s recent struggles, Smart is still averaging 17.5 points per game. He has had some difficulties, but the incident against Texas Tech should not scare teams away. Before this point in the season, Smart’s character has never been questioned. In fact, it has been praised by coaches throughout the league, especially his own coach, Travis Ford.

“There were a couple of games where we were up by 30, 40 points at halftime. I told (him) because we had to play five games in a row, I said, ‘Marcus I’m not playing you in the second half.” 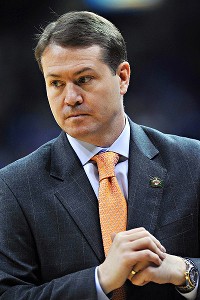 Courtesy of US Presswire

Smart’s response? “No problem, coach, whatever I can do to help.”

The fact that he chose to return to school for his sophomore year also speaks to the quality of his personality. While this doesn’t mean that all players who leave early have low character and that all who do return have high character, it does show a certain commitment level to the team. Oklahoma State came into this season ranked in the top-10 due in large part to Marcus Smart.

While Smart has shown some indications of immaturity, he should stay near the top of the lottery draft board. He has a body built for the NBA – even though he could stand to slim down – and shows he can score against good talent. It’s exciting to see where Marcus Smart can lead the Cowboys and which NBA team he will eventually land with come June.