The playoffs haven’t even started yet, but the NBA draft may be one of the hottest topics around the sports world right now.  Who will go first, second, third, and who will win the lottery? All of these questions, but no one knows for sure.  We may not know who will go where, but we all can tell what areas teams need to improve.  Some teams require a lot of improvement, while other teams may need one or two players.  For this article, I’m going to stick with the Oklahoma City Thunder, a team that is at the top of the league, but is a player or two away from being the best team in the league.

We all know the star players on the Thunder like Kevin Durant, Russell Westbrook, and some would debate that Serge Ibaka is close if not already a star player.  So what do they need to be the best team in the league?  A shooting guard for starters.  Their shooting guards right now are Thabo Sefolosha, Jeremy Lamb, and Andre Roberson.  Two of those players are under 23, Thabo being 29 is tied with Kendrick Perkins for the oldest player in the starting lineup ( when he isn’t hurt ).   Lamb has been playing okay, but is very streaky, and loves to shoot the ball.  With players like Durant and Westbrook, the Thunder don’t need another player who likes to shoot.  Andre Roberson is a wild card, we aren’t quite sure what he can do on the court yet.  For that reason, I would say keep him but trade away Lamb.  If OKC wants to become the best team in the league they are going to need a better shooting guard, and Lamb will not suffice.

Now what would OKC get in return for Lamb on draft day?  Well if the Thunder want to be the best they need a first round draft pick.  Not too high, maybe a mid first rounder, like 15, 16, or 17.  Now Lamb is obviously not worth a first round draft pick in this year’s draft, so what would you also give up, Kendrick Perkins?  Let me say that again, Kendrick Perkins.  The most useless waste of cap on the Thunder’s roster.  The Thunder should trade him for a new team bus, because that would be more useful to the team.  He isn’t a good center, in fact, I think Steve Adams should become the daily starter in place of Perkins.  Plus he is making over eight million dollars this year.  Perkins is a very chippy player, and brings a physical aspect to the team, but not eight million dollars worth of physical aspect.  Now are Perkins and Lamb really worth a first round draft pick?  Probably not, but throw in a second rounder this year and next year or something like that, and it will be beneficial in the long run. 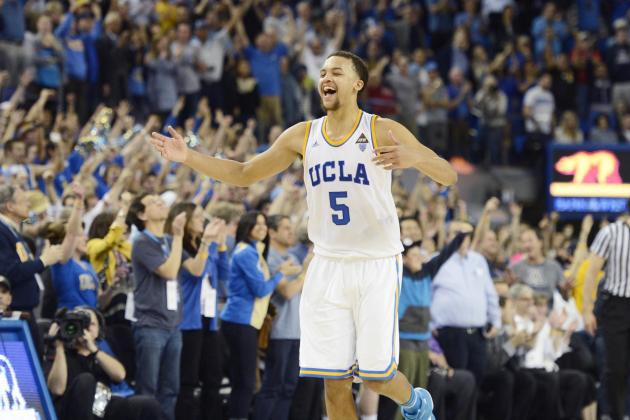 Let’s say OKC made that trade, now what?  With that middle first round draft pick the Thunder should select  Kyle Anderson from UCLA.  He is a 6 foot 9 point guard, but with that size can easily be a 2-guard.  He averages just under nine rebounds a game, six and a half assist, and around 15 points.  The rebounding would help the Thunder in a huge way, and he is a defensive force when you put him up against point, or shooting guards.  He also causes a matchup problem, which would give OKC two of those, with the 6-9 shooting guard and the 6-11 small forward.  Good luck guarding them if that happens.  Anderson also isn’t a player who has to jack up 25+ shots, and he’s focused on defense.  The Thunder don’t need another scorer, they need someone who can add 10 points on a nightly basis and can play shut down defense.  Anderson would be able to do both of those, and being as young as he is ( 20 years old ), he can grow with the rest of the young team in Oklahoma City.

The Thunder traded Perkins, so who are they going to replace him with? Steve Adams can’t do it alone.  Greg Monroe is the answer.  Monroe made a little over four million this year, which is double what Perkins is making.  Cutting ties with Perkins would free up cap space to go get Monroe, and be able to give him nice contract.  He would obviously start, but with Adams coming off the bench, that would be a very nice duo at the center position.  Greg is still young as well ( 24 years old ), so he can also grow with the young roster of Oklahoma City.  He has been playing with the Pistons, so I’m sure he wants to play for a winning organization, and OKC could give him that.

Just think about this for a minute: Westbrook, Anderson, Durant, Ibaka, and Monroe as your starting five, none of them being over 25, and young players coming off the bench like Adams, Roberson, and Jackson to name a few.  Oklahoma City is on the cusp of being the best team in the league. A few moves such as freeing up cap space and drafting a good player or two will put them over the top.  This could be the best team in the league for a long time.

Why James Harden deserves to be the NBA MVP