As we head into Spring, counting down the days to Opening Day, it’s time to write up my predictions. We have seen some truly astonishing things this off-season, including; Jay Z earning Robinson Cano a mad $240 million deal, Masahiro Tanaka becoming the fifth highest paid pitcher in baseball history in order to don the pinstripes and so much more, here’s what I think will happen in the coming season.

AL East – Last year the Boston Red Sox went from worst to first, sadly I can’t see this happening for Toronto as they have simply hibernated this off-season. The Baltimore Orioles, likewise, have hit self-destruct this off-season, losing Jim Johnson and Grant Balfour, and simply adding outfielder, after outfielder, after outfielder ruling them out of contention too. Falling just short will be the Red Sox who have had a pretty poor off-season, however they do have exciting prospects Xander Bogaerts and Jackie Bradley Junior set to play, but it won’t be enough. 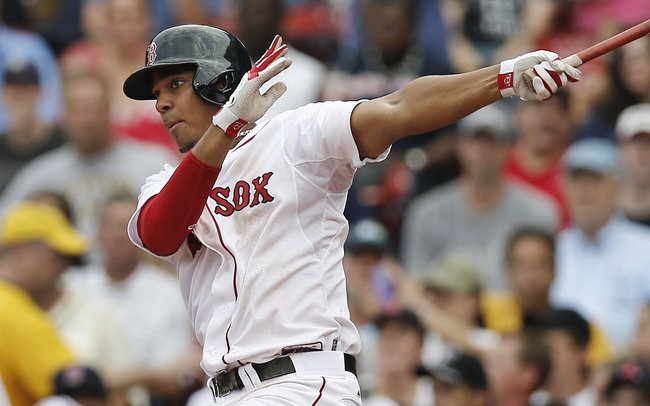 The Yankees will have to settle for a wildcard, just edging out the Red Sox, their enormous off-season will make them competitive, but a lack of pitching and primarily a weak bullpen will be their downfall.

Call me crazy, but I think the Tampa Bay Rays will win the division, a combination of fabulous pitching – providing they keep David Price – a strong bullpen and a line-up lead by Will Myers and Evan Longoria is too good to ignore.

AL Central – This is a tough one to call, I place the Minnesota Twins at the bottom, their prospects make them an exciting team, but more for 2015, they no longer have Joe Mauer calling the shots behind the plate and adding some mediocre pitching was the highlight of a rather poor off-season. The Chicago White Sox – lead by Chris Sale, and Cuban Phenomenon Jose Abreu – and Cleveland Indians – lead by Jason Kipnis and Justin Masterson – will both just fall short. Miguel Cabrera; Credit to US Presswire

The Kansas City Royals and Detroit Tigers will fight it out for top spot, last season the Tigers stormed to another division title, but a poor off-season will be a massive set back.

Will it be – Holland or Nathan? Aoki and Infante or Jackson and Kinsler? Hosmer and Butler or Cabrera and Martinez? Shields and Vargas or Verlander and Scherzer? – it ought to be close, very close, again, I’ll be bold, I’m opting for the Royals to knock the Tigers off the top spot and secure a place in the post-season.

AL West – I might as well be trying to predict the lottery scores; well, except the Houston Astros, sadly, they are sure to finish last again, dozens of talented prospects will make them a force to be reckoned with, but in the future. The Seattle Mariners will be good, very good, but an inability to support Cano with good quality bats will be the problem, King Felix and newly proclaimed King Robinson will pursue the wildcard along with Mike Trout and his Los Angeles Angels,their inability to fortify their rotation will take them out of the title running, but Trout’s heroics will allow them to battle for the wildcard.

Then the showdown for top spot; will Billy Beane’s small yet genius trades mixed with a dangerous rotation and one of the best bullpens in the game be enough to defeat the Rangers mighty offence – lead by new signing and on base machine Shin-Soo Choo? And in terms of pitching, can Japanese ace Yu Darvish carry a rotation with Derek Holland?

It will be close, mighty close, but I’m going for the Rangers, Darvish will be able to single handedly carry the rotation simply because of their terrifying line-up.

NL East – The East is a much strengthened division on the whole. The Mets will be solid, new additions Curtis Granderson and Bartolo Colon will contribute to a promising season, but they’ll have to wait until Matt Harvey returns before they can compete. The Phillies? Likewise, they will be good, especially with Cliff Lee, Cole Hamels and A.J Burnett in the rotation, but a sheer reliance on Ryan Howard to produce in the middle of the line-up will hinder them. Jose Fernandez and Mike Stanton will drive a Miami revival, other additions like Saltalamacchia and Rafael Furcal will boost their play-off credentials, but another arm in the rotation is needed if they want to play October ball.

The Atlanta Braves have lost two key players in Tim Hudson and Brian McCann but still have the depth and talent to field a team on opening day capable of retaining their division title, nonetheless, they will fall short to the Washington Nationals.

A scary line-up which includes Bryce Harper, Jason Werth and Ian Desmond will be supported by one of the best rotations in the game, who are supported by an amazing bullpen. Arms like Stephen Strasburg,Gio Gonzalez and the newbie Doug Fister will simply have too much for the Braves to compete with.

NL Central – Milwaukee have the bottom spot, despite adding Garza I don’t think they’ve enough talent to surpass the bottom. The Cincinnati Reds – another bold prediction – will slip to down from their 2013 wildcard finish, an off-season of pure hibernation being the main reason why, they’ve lost Bronson Arroyo, Ryan Hanigan and Shin-Soo-Choo, three key players and added nothing of worth. Competing with the Reds will be the Cubs, I foresee a bounce back year from Starlin Castro, a solid rotation – if they keep Jeff Samardzija – and most importantly some scary young talent. Pittsburgh will once more settle for a wild-card spot, Andrew McCutchen and his fellow Pirates will miss A.J Burnett too much, and consequently won’t have the strength to knock the Cardinals off top spot.

St Louis reached the World Series again in 2013, and nothing says they won’t in 2014, they’ve added a superb glove in Peter Bourjos to the outfield and some pop at shortstop in Jhonny Peralta and have exciting prospect Kolten Wong to galvanise the new look infield. Adam Wainwright will continue to mesmerise hitters, and the young arms of Michael Wacha, Shelby Miller and co. will propel the Cardinals to another NL Central title.

NL West – Once more, the Rockies lack of pitching and loss of Dexter Fowler will be the downfall of their 2014 campaign, Troy Tulowitzki and Carlos Gonzalez won’t be able to bring October ball to Coors field without some quality pitching. The much improved Padres will have a great year, but will fall just short due to lack of hitting, the Arizona Diamondbacks will battle for the wildcard spot, Paul Goldschmidt and Mark Trumbo will lead the team in their wild-card charge. Finally, the Dodgers and Giants will battle it out for top spot; recurring injuries could again be a problem for Los Angeles, and lack of infield depth will be an even bigger problem. Kershaw and Greinke will continue to dominate hitters, but the Giants will just win the division, a combination of pitching and hitting, nothing outstanding, just all round solid baseball will be the key.

Sandoval, Posey, Pence, Belt and Morse could all hit 20 home runs, and Cain, Bumgarner, Lincecum, Hudson and Vodelsong will return to form to lead San Francisco into the post-season.