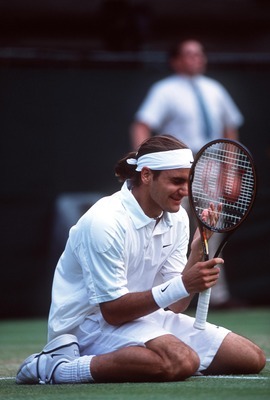 Federer celebrates his upset victory over his idol

We didn’t know it back then.

We didn’t know that on July 2nd 2001 the tennis world was witness to what was a “changing of the guard.”

And what would be their only meeting, a 19-year old Swiss prodigy by the name of Roger Federer would dethrone his idol Pete Sampras in the fourth round of Wimbledon in a five-set thriller at Centre Court.

The 29-year old Sampras was searching for his fifth straight Wimbledon title – and his eighth overall – and was riding a 31-match winning streak at the All England Club.

Federer, a former Wimbledon junior champion, was a player with a very promising future but one who had not yet put everything together.

Many did not expect him to beat Sampras (arguably the greatest grass player ever) that day, so it came as a mild surprise when Federer took the first set on a tie-break. However, Sampras appeared to restore order when he won the following set 7-5 to level the match at a set apiece.

However the younger player was at it again, winning the third set 6-4 to put Sampras on the ropes.

With the crowd buzzing with excitement, Sampras again showed the heart of a champion, winning on a tiebreak (rather convincingly at 7-2) to force a fifth and final set.

The fifth set was a tense affair until the twelfth game, when Federer managed two match points on Sampras’ serve. And on his first chance, the teenager delivered with a georgeous return forehand winner to clinch the match, falling on his knees (Bjorn Borg style) in utter joy and perhaps a little disbelief.

The history of men’s tennis seemingly changed after that match. Although he would win one more Slam (2002 US Open) it was the beginning of the end for the career of Sampras. And even though it would not be until 2003 before Federer won his first Slam (at Wimbledon no less), it was a sign of things to come.