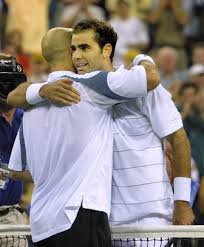 Sampras and Agassi at the net

Every athlete dreams of going out a champion.

Whether it’s Ray Lewis winning a Super Bowl in his last season with the Baltimore Ravens, John Elway with the Denver Broncos, or Michael Jordan winning his sixth NBA championship in his final season with the Chicago Bulls with the game-winning jumper (oh wait, he messed that up by coming back to the Washington Wizards of all teams), many athletes dream of having a storybook ending to their careers.

Eleven years ago, Pete Sampras trolled into the U.S. Open for the final time – a shell of the player that he used to be. The 31-year old  was seeded 17th at the time and was on a drought of 33 consecutive tournaments without a win (including a second round loss at Wimbledon to a player ranked outside the top 100).

Many wrote him off as a favorite for the title, but the 13-time Grand Slam champion insisted that he had one more title run left in him.

He still had many doubters even after winning the first two rounds. His third round opponent, Greg Rusedski, was not too impressed either after losing to Sampras in a five-set marathon, saying that the American was “a step and a half slower” and didn’t expect him to win another match.

But Sampras would keep on winning, beating young German Tommy Haas in the round of 16 and then Andy Roddick (the new face of American men’s tennis) in the quarterfinals. In the semifinals he had a comfortable straight sets victory over Sjeng Schalken.

In the finals he would come up against a familiar foe, fellow American and rival Andre Agassi. Twelve years earlier, a then 19-year old Pete Sampras defeated Agassi for his very first Grand Slam title (and at the same venue no less).

Sampras was crisp at the start (Agassi still looked heavy-legged after a gruelling semifinal victory over world-number one Lleyton Hewitt), serving and moving extremely well as he took the first two sets. However, Agassi finally got himself going to win the third.

Sampras looked tired in the fourth set. His serve began losing some zip (think of a fastball pitcher who gets tired in the late innings) and Agassi’s timing on his returns were becoming a major concern. Somehow, in the ninth game of the set, Sampras produced a bit of magic (seemingly out of nowhere) to break Agassi’s serve and went on to hold on his next service game for a 6-3, 6-4, 5-7, 6-4 victory and his 14th career Grand Slam title.

Following the win, Sampras indicated that this might have been his final match, calling his victory over his rival a “storybook ending”. He officially called it quits one year later (he did not compete in any tournament after the 2002 US Open) bringing an end to what was an illustrious career.

A career with a storybook ending!