Coming into the 2013 Confederations Cup, I believed that it was imperative that host nation Brazil would go on to win the tournament.

Support for the Selecao have not been the same since their disappointing quarterfinal exit from the 2010 World Cup, followed by three unimpressive years under Mano Menezes. A country that has always been at or near the top of the FIFA world rankings had plummeted outside of the top 20 as of June. Brazilians seemed almost convinced that their game (jogo bonito) had been surpassed by their European counterparts.

But in one fortnight Brazil went from a question mark to a bonfire World Cup contender, which is good news for fans because a strong Brazil makes for a far more potentially entertaining World Cup in 2014.

No where was the team more impressive than their 3-0 demolition of Spain – the most successful soccer nation of the past six years (2008 & 2012 European champions and 2010 World Cup champions). Spain were not just beaten. They were humiliated.

Neymar proved he is worth the hype, scoring 4 goals and winning the Golden Ball for best player of the tournament

The game-plan set about by new (and old) Brazilian manager Felipe Scolari against Spain was brilliant and executed by his team to perfection.

Instead of just sitting back against Spain, Brazil would chase and pressure the ball on defense, even getting physical at times – a trait not usually associated with Brazilian football. It disrupted the rhythm of the Spaniards and they looked very uncomfortable. And all this to the approval and adulation of their home crowd even though the style of play by their team seemed so un-Brazilian. 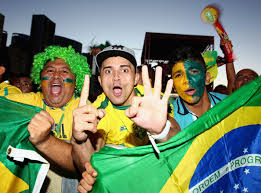 And so with one tournament victory, the Selecao accomplished two things: they announced to the world that they will be contenders next year and they once again have the full support of the nation.

And coming off this warm-up tournament victory, confidence in the Selecao for the big tournament twelve months from now should be in a far better place.

They have a manager in Felipe “Big Phil” Scolari who is getting the team finally moving in the right direction (and one who has tasted World Cup triumph as Brazilian manager once before in 2002). They have a dynamic player in Neymar, who showed in this tournament that he is worth all the hype and should be considered as one of the top five players on the planet alongside guys like Lionel Messi and Christiano Ronaldo. Most of their stars (such as Neymar, Oscar, Lucas Moura and Paulinho) are very young and should be even better players one year from now. They have an improving defense, led by David Luiz and Thiago Silva (with help from defensive midfielders Luiz Gustavo and the aforementioned Paulinho). More importantly they will be playing in front of a rejuvenated home crowd who have fallen back in love with them. Think home field advantage does not matter? Well, the Selecao now have a 58-match unbeaten streak on home soil following their victory over Spain.

The rest of the world have been put on notice!