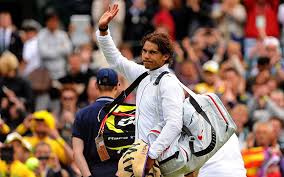 Nadal salutes the fans following his shocking defeat to Darcis

It was only Day One, but tennis fans witnessed what has to be one of the greatest upsets in Wimbledon history when French Open champion Rafael Nadal suffered a stunning first round loss at the hands of 135th-ranked Steve Darcis of Belgium – in straight sets no less!

It was Nadal’s first loss in an opening round of a Grand Slam event, and brought an end to his 22-match winning streak. It also marked the first time since 1997 (Gustavo Keurten) that the reigning French Open champion had lost in the first round at Wimbledon.

Here are a few thoughts on this historic upset: