She rolled over everyone else in her path!

Serena was so dominant that in her seven matches she only spent about 8 hours, 35 minutes on the court (which is like a full day’s work for most of us), and lost just 29 games (and one set) the entire tournament.

In the finals, she started off somewhat slow before roasting Maria Sharapova 6-4, 6-4 to claim her second French Open title (and first since 2002) and her 16th Grand Slam.

Serena might be playing the best tennis of her career – at age 31! She is the top ranked player in the world (the oldest in the history of women’s tennis) and the gap between her and the second-ranked player seems to be as wide as the Pacific Ocean. She is without a doubt the best player of this era.

Instead we need to ask ourselves this: Is Serena Williams the greatest female to ever swing a tennis racket?

During their broadcast of the women’s finals NBC tennis analyst John McEnroe declared Serena Williams as the greatest female player ever. Some may find it hard to believe given Johnny Mac’s affinity for hyper-boles, but even so it is hard to argue otherwise.

Let’s start with the fact that the Serena serve might be the most dominant shot in the history of women’s tennis. Serena not only serves big (she actually serves bigger than some of the men on the ATP Tour) but she gets them in at a very high percentage. And in the cases when she doesn’t get her first serve in, it also helps to have one of the best (if not the best) second serve ever. But the Serena serve is more than just power and accuracy. Because she has the same motion on every serve, her opponents have a tough time reading it. It is a weapon that Serena possesses that no other woman has ever had – the ability to consistently win easy points off the serve.

Of course, Serena’s greatness is more than just her serve. She might be the only tennis player in history without an apparent chink in her armor. She hits with power and accuracy from both wins. She’s athletic with great court coverage. Her defense is as impressive as her offense. She can play close to net as well as from the baseline. And besides her obvious physical gifts, she is one of the more mentally tough players ever. What other female tennis player have we seen with all these qualities (tangible and intangible) in their game? 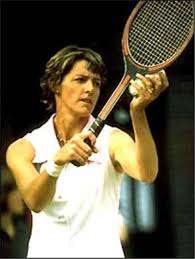 But with the level she is playing at, who’s to say that the record is out of the question?

Serena Williams will be favored to win every Grand Slam for the next 2-3 years. She could catch Chrissy and Martina by the end of this year, leaving her six Slams short of Margaret Court. Should that happen, who’s to say that she then couldn’t win six of the next eight Slams? Do you see anyone on the tour right now who can stop her? It would solidify her status as the greatest female tennis player of all time.

For me however, that status has already been set in stone.