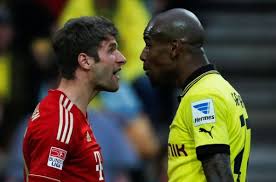 Preview:
The winner of Europe’s premier football club tournament will be determined this Saturday at Wembley Stadium, England between Bundesliga rivals Bayern Munich and Borussia Dortmund – the first time that two German clubs have made it to the finals.

Analysis:
If one is to go with the boxing cliche that “style makes fights” then we could be in for a treat.

In one corner we have Borussia Dortmund – a club filled with young but talented players. Led by their manager Juergen Klopp, they are an attack-minded team who prefer to play very fast and very vertical. They move the ball extremely quickly and like to employ the long ball with striker Robert Lewandowski usually the target.

In the other corner is Bayern Munich – one of the bigger clubs in Europe. They are a team with not only great talent but great depth as well. They do not have a transcendent player like Messi or Ronaldo, instead it makes them even more dangerous because you cannot focus on stopping one guy.

Bayern’s style is a little more organized and structured. They prefer to sit back on defense and then hit you on the counter outside with players such as Philipp Lahm, Thomas Mueller, Franck Ribery and Arjen Robben.

Like Dortmund, they also like to play very quickly (though they are not as much of a vertical passing team) so one should expect the match to be a back-and-forth affair.

Previous Results
Not much to tell from their two meetings during the 2012-13 Bundesliga. Both matches ended with identical 1-1 scorelines. However, Bayern did beat Dortmund in the quarterfinals of the German Cup (1-0). If anything, expect another tight contest come Saturday.

Pick:
This will be Bayern Munich’s third UEFA Champions League final in the last four seasons, both times coming up short (to Inter Milan in 2010 and Chelsea last year).

Last year’s defeat was especially heart-breaking! Bayern was the better team against Chelsea and looked to be on their way to victory in their own stadium (the match was played at Allianz Arena in Munich) only to lose on penalty kicks – a cruel way to lose any match. 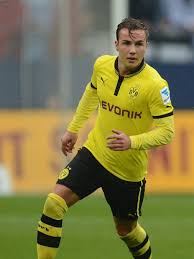 Dortmund midfielder Mario Goetze will not play in the finals

The feeling was that the defeat would be a great psychological blow on them. However it has had the opposite effect. It seemed to have made them even stronger and more determined to make amends for what transpired.

Bayern Munich has been the best club in Europe the past 12 months! They are on the verge of a possible treble, having ran through the Bundesliga (winning it by a whooping 25 points!) as well as making the finals for the German Cup (which will be played on June 1st). They look to be clicking on all cylinders – especially after the way they just took apart Barcelona in the Champions League semi-finals.

Borussia Dortmund have proven to be top side in both Germany and Europe. But they are not quite as deep and talented (which is to be expected given the financial muscle of Munich). They also will be at a disadvantage given the absence of star midfielder (and perhaps their best player) Mario Goetze. That is definitely a big blow!

Still, Dortmund are not afraid and they will take the game to Bayern. The game should be another tight one. However, Bayern Munich will not be denied a third time as they claim redemption – and the Cup!

Which team will win the 2013 UEFA Champions League final?