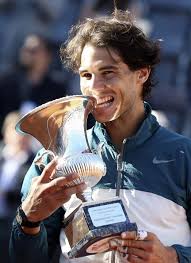 Nadal wins the Rome Masters one week after winning at Madrid.

Have you ever watched a movie where you already know the ending?

How about reading a novel under the same circumstances?

Not so exciting is it?

Well, that’s exactly how I feel when handicapping the men’s singles for the 2013 French Open.

Why wait for the seeding or for the draw when I already know how this tournament is going to end – with Rafael Nadal biting yet another Coupe des Mousquetaires (the trophy awarded to the winner of the men’s singles)? Why bother writing an entire post previewing and making predictions for the men when I already know who’s going to be the last man standing?

Where’s the fun in that?

To say that Nadal is the overwhelming favorite to win at Roland Garros yet again is quite frankly an understatement.

Nadal has won seven of the last eight French Opens (from 2005-2012). His career record at Roland Garros is 52-1, his sole loss coming in 2009 at the hands of Robin Soderling. Nadal has a ridiculous win-loss record of 285-21 on clay (21-2 in 2013) including 39-6 in clay-court finals (falling only to Novak Djokovic, Roger Federer and Horacio Zeballos – in Nadal’s first event since an 8-month injury layoff).

Rafa is simply the greatest clay-court player the game has ever seen. With his heavy topspin forehands, consistency, court coverage, footwork, and athleticism, it almost seems that Nadal was made to play on this surface.

And of course there is the intimidation factor. Even his biggest rivals readily conceive that he is the top favorite to win the French Open. It almost begs one to ask why the rest of the field should bother showing up to Paris. 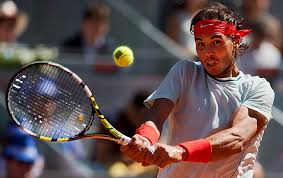 Still, there should exist a slight possibility that a healthy Nadal could be derailed in his quest to win his eighth French Open. Right?

I mean, he could come across players such as Tomas Berdych, Juan Martin del Potro, or Jo-Wilfried Tsonga – bigger players with even bigger ground-strokes that could have the game of their lives and just blast Nadal off the court. Couldn’t they?

Or he could come across countryman David Ferrer (an excellent clay court player in his own right) on a day where he plays his best and Nadal somehow plays his worst. He would have a great chance for an upset then. Wouldn’t he?

Or what about Great Britain’s own Andy Murray, the one member of the “Big Four” who does not have a victory over Nadal on clay (0-4)? Perhaps he’s due for that maiden win. It may well come at the French. mightn’t it? Note: Andy Murray has withdrawn from the French Open due to a bad back.

What if Roger Federer is finally able to keep his one-handed backhand from deconstructing against Nadal (think of a building when it’s hit by a wrecking ball) and is able to get a high percentage of his first serves in against Nadal? That should be enough to finally beat his nemesis at Roland Garros. Shouldn’t it?

Or what if Novak Djokovic (the player I believe to be the biggest threat of all) happens to shake off this mini-slump that he’s currently in and play like the guy who beat Rafa in the Monte Carlos finals a few weeks ago -on clay? Djokovic has split the last six meetings on clay against Nadal, all in best-of-three set matches. Perhaps he can show that same level of success in a best-of-five set match. Couldn’t he?

Frankly, I don’t see any of these possibilities happening. They should just engrave Nadal’s name on the trophy right now.

Wake me up when Wimbledon rolls around!