Somehow you just knew that this was coming.

Just days after their shocking 1-0 defeat to Wigan (a club that will be relegated from the Premier League at the end of the season) in the FA Cup Final over the weekend, Manchester City decided that it was time to let go of their manager Roberto Mancini.

However I believe that Manchester City is making the correct decision.

The club underachieved under Mancini. One league title (earned the hard way – two goals in injury time on the final game of the season), an FA Cup, and several early exits in the Champions League for a side as deep and talented as Manchester City should not be acceptable for owners who have invested so much as Sheikh Mansour has ($500 million on players during Mancini’s three and a half years in charge).

Mancini’s greatest fault as manager was his inability to man-manage all the talent bestowed to him. The players finally grew discontent and as a result the Italian manager had to go.

On paper, the talent on Manchester City is superior to that of neighbors and 2012-2013 champions) Manchester United. So how is it that United are 12 points better in the Premier League standings?

Maybe it has to do with the fact that Sir Alex Ferguson had a firmer handle on his club than Mancini had on his. If Ferguson had a dispute with a player, it would be kept in-house. When Mancini had a dispute with a player he would talk about it with the press. While United handled their affairs behind closed doors, City’s were played out to the public (like with Carlos Tevez for example). And while no player was bigger than the club at United and no preferential treatment was shown, certain players (Tevez and Balotelli) seem to be able to get away with murder at City.

Had Carlos Tevez ever refused to enter a match as a substitute while he was at United, he would surely would have been immediately exiled from Old Trafford. And no way would the shenanigans of star striker Mario Balotelli been tolerated for as long as it was by Mancini. The other players on the squad notice these things, and that can not be good for team chemistry and camaraderie.

The fact that Balotelli, now playing well for Italian club AC Milan, was not able to produce regularly while with the Blues also points out Mancini’s inability to motivate his players. It showed during the season and it especially showed during their FA Cup loss to Wigan. Mancini’s players looked to be almost disinterested for large chunks of the match!

Mancini has also been criticised by many for his management style which I believe is well warranted. 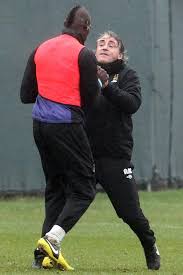 Ever the Italian, Mancini manages his side for the “1-nil” wins. But how can one choose to be so defensive with a club with such talented attack-minded players such as David Silva, Carlos Tevez, Sergio Aguero, Edin Dzeko, Mario Balotelli (before his transfer), and Samir Nasri? When you have the firepower that Mancini had at his disposal, it would be wise to allow them to show off their creativity. I also thought he managed way too cautiously against the bigger clubs.

In the end, it looked to me like Mancini had lost his players’ trust and respect and his management style did not seem to suit the English brand of football. As a result he had to go.