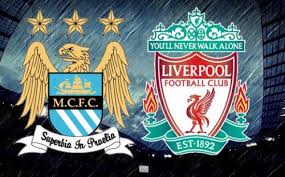 PREVIEW: We are coming towards one of the busiest – and most crucial – weeks on the English Premier League fixture. While most of the other leagues in Europe will be on winter break, in England it will be a war of attrition. That’s because starting from Boxing Day (December 26th), each club will have three league matches in a seven-day span. It is a part of the fixture that Sir Alex Ferguson famously referred to as “squeaky bum time”. With that in mind we’ve added a “Boxing Day” edition to our match of the week, with what should surely be the headline matchup of the day as Liverpool travels to face Manchester City.

MANAGERS: Count us in as one of the many who has been impressed with the job of Liverpool manager Brendan Rodgers. From the players he has acquired since being hired as manager to his football philosophies (such as going much of the season with just three defenders which has made Liverpool a much more explosive club offensively), Rodgers has brought renewed optimism to Anfield. Meanwhile all Manuel Pellegrini has done is make City the best goal-scoring club in England (if not all of Europe) – a far cry from the days of the ultra-cautious Roberto Mancini.
Advantage: None 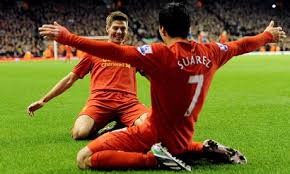 FORWARDS: These are the top two goal-scoring clubs in England, but with that said there is a sizeable gap between Manchester City and Liverpool. Liverpool has the best goal-scorer (and player) in the league in Luis Suarez who is on a ridiculous pace of 19 league goals in just 12 matches. However City’s depth gives them a small advantage in our opinion – particular with Daniel Sturridge being out injured for Liverpool. Whereas there is an over-reliance on Suarez, Manchester City can count on Sergio Aguero, Alvaro Negredo, and Edin Dzeko for goals.
Advantage: Manchester City

MIDFIELDERS: Liverpool’s midfield has gotten better as the season has gone on. Jordan Henderson has been one of the most improved players in England. Philippe Coutinho is fully fit and playing well. They have picked up the slack in the absebce of skipper Steven Gerrard. Yet with all that said, it is still a notch below Manchester City’s in terms of depth and quality. We have harped all season long that City’s midfield might be the best in English football. Yaya Toure might be the best midfielder in the league. His work on both ends of the pitch allow attacking players such as David Silva, Samir Nasir, Jesus Navas, and James Milner to move forward in support of the forwards – a big reason why City tops the league in goals scored.
Advantage: Manchester City

DEFENDERS: Give credit to both clubs that despite being known as clubs that like to attack, they are both amongst the best in not allowing too many goals as well. Again though, this is another area where City’s depth and talent gives them an advantage. Despite an own-goal over the weekend, Vincent Kompany is one of the best central defenders around. And wing-backs Gael Clichy and Pablo Zabaleta are very dangerous going forward (frankly you can say that about almost every player on City). Liverpool are no slouches! Kolo Toure has provided them with a veteran presence this season, which has seen Martin Skrtel play his best football in a Liverpool jersey. Glen Johnson has held down the right-back position since his return and local lad Jon Flanagan has given the club a boost since replacing Jose Enrique.
Advantage: Manchester City

GOALKEEPERS: We thought that Liverpool were making a mistake by letting Pepe Reina go, but Simon Mignolet has done the job for his club starting with his save of a penalty kick in his debut to earn Liverpool three points. Joe Hart looked better over the weekend, when Pellegrini gave him the start after sitting him for seven league matches. But we don’t believe that one match is enough to fully restore his confidence.
Advantage: Liverpool 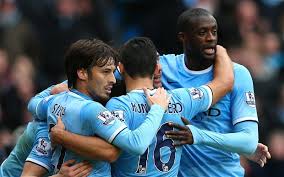 Led by (from left to right)Silva, Aguero and Toure, City have been unbeatable at home (Getty Images)

X-FACTORS: Jordan Henderson is our X-factor for Liverpool. The 23-year old has taken his game up a notch the last two matches in particular, coinciding with the loss of Steven Gerrard. He has also struck up a partnership with Suarez. He needs to continue to play as well – if not better- if Liverpool are to get a result at Etihad Stadium. For Manchester City, the X-factor is their home stadium. It’s not that they are undefeated at home (eight wins in eight matches). But it’s how they have demolished teams at home. City has scored more goals at home alone (35) than all the other clubs but Liverpool have scored overall!
Advantage: Manchester City

PREDICTION: Although it looks like a tough matchup on paper (both clubs sit atop the table at the time of writing, with Arsenal yet to play) the pick here is easy. As we’ve stated earlier, City has been crushing teams at home. They’re averaging 4 goals a home match. So far this season, they have demolished neighbors Manchester United 4-1 and crushed Arsenal 6-3 just over a week ago at Etihad Stadium. We fear the same fate awaits Liverpool.

Who Will Win Our EPL Boxing Day Match Of The Day?