The 2013 tennis calendar was one filled with several special moments and interesting story lines.

We saw Rafael Nadal return from a knee injury to reclaim his number one ranking. We saw Serena Williams continue to dominate the rest of the WTA Tour. We saw history being made, with Andy Murray becoming the first British player in 77 years to win the Wimbledon title. At the same tournament we saw Mario Bartoli finally win a trophy after 46 consecutive grand slams, only to retire from tennis a few weeks later. We saw the decline of Roger Federer, perhaps the greatest to ever play the game, and we also saw the emergence of new names such as Sloane Stephens and Grigor Dmitrov.

Nadal is 49-1 lifetime at the French Open (EPA)

RAFA UPSET AT ROLAND GARROS
Talk about borderline crazy! I’m picking against the man regarded as the greatest clay court player of all time. Rafael Nadal has won the French Open eight times -including the past four years – and has an overall record of 59-1 at Roland Garros. But here’s the thing…the last time Nadal attempted to win the Coupe des Mousquetaires for a fifth year in a row, he was upset in the fourth round (by Robin Soderling in 2009). I believe that 2014 is the year that Djokovic finally gets Nadal at the French. He is the one player who is not intimidated by Nadal on clay, and least we forget, Nadal had to come back from a break down in the final set to earn a hard-fought victory. Just knowing how close he came to beating Nadal in 2013, will spur Djokovic on in 2014.

VIKA HAS HER REVENGE IN NEW YORK CITY
Victoria Azarenka has lost to Serena Williams in the finals of the U.S. Open the past two years (she’s also lost to Serena at the U.S. Open the past three years). In 2012, Azarenka was serving for the match before Serena came back to hoist the trophy. In 2013, Azarenka had to fight from a set and a break down to force the match to a final set, before running out of gas (see video below). The top two female players in the world will meet in a third consecutive U.S. Open final, but this time it will be Vika left standing in the end. There will be no U.S. Open three-peat for Serena Williams. 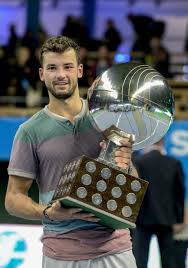 THE RISE OF BABY FEDERER
2013 was sort of a coming-out party for the 22-year old Bulgarian Grigor Dimitrov, the youngest player ranked in the top 30 (currently ranked 23rd in the world). The former junior World No.1 made the semifinals at Monte Carlo, defeated Djokovic at Madrid, and won his first career ATP singles title at the Stockholm Open in October. In 2014, the man nicknamed “Baby Federer” will add consistency to his talent as he starts putting it all together. Remember, it took the original Federer about four to five years before he put everything together and became THE Roger Federer. In fact, Roger won his first Grand Slam at the age of….22! Dimitrov may not win a Slam next year but he will continue his climb up the rankings – all the way to the top ten!

BYE BYE VENUS
How much longer can Venus Williams continue playing tennis? The seven-time Grand Slam champion is barely ranked inside the top 50 (currently ranked 47th), cannot stay healthy for any extended period of time, and at age 33 is past her prime as far as tennis is concerned. And we have not even mentioned her ongoing battle with Sjogren’s syndrome (an autoimmune disease that leads to joint pain and increased fatigue). Venus will continue to play – and struggle – in 2014, before gracefully and quietly calling it quits at the end of the year.