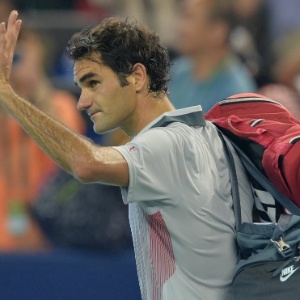 Roger Federer’s nightmarish 2013 continued last week at the Shanghai Masters with a third round loss to the enigmatic Frenchman Gaels Monfils in three sets. As a result, the man whom many (myself included)consider the greatest tennis player ever is now in danger of not qualifying for the year-end ATP Tour Finals – something he had done for the past 11 years. A few days thereafter Federer announced that he has decided to part ways with coach and personal friend Paul Annacone after a three-year partnership.

For fans of the Swiss maestro, watching Federer’s downward spiral in 2013 has been tough to digest.

He has just one measly tournament victory for the year – albeit a Wimbledon tuneup on the grass of Halle.  He saw his ranking fall from second to seventh (his lowest ranking since 2003). He saw his  record streak of 36 consecutive Grand Slam quarterfinals come to an end at Wimbledon of all places. Speaking of Slams, Federer did not make a Grand Slam final for the first time since 2002. He’s losing to players outside the top 100. He’s losing to players he used to own during his career (like Tommy Robredo for example, who took Federer out in the fourth round of the U.S. Open).

His recent level of play has many trying to figure out what is wrong with the Grand Slam king. Is it a loss in confidence? Is it a loss in desire for a man who has accomplished everything in the sport? Or is it simply because Father Time is winning the battle (doesn’t it always?) against a 32-year-old with several miles on his body? Whatever the case, seeing the state of Roger Federer’s game dissolve to this is more than his fans (yes, and I include myself) can take.

So why do I believe that Federer will bounce back next season? Because after a spectacular, return-to-form season in 2012, Roger admittedly expected a drop off in 2013 – although perhaps not to the level it currently is. In 2012 Federer won 71 matches (his most in 2006), had a 86% winning percentage (his most since 2007) and captured six titles (also his most since 2007). No title was more significant that year than at the All-England Club where he captured his seventh Wimbledon title (tied for the most Wimbledon titles with his idol Pete Sampras, and his first Grand Slam since the 2010 Australian Open). Not only did that extend his all-time record of Grand Slam titles to 17, but it also returned him to the number one ranking in men’s tennis. The latter would bring another record as he surpassed Pete Sampras career record  of most weeks as world number one. Add to the mix an Olympic silver medal, and you can tell that not only was 2012 a successful year for the Swiss, but a gruelling one.

In 2013, Federer decided to scale back his tennis schedule in an attempt to take care of his body (in particular his back) even though he had tons of ranking points to defend because of 2012. It may not have been the wisest decision when you see how terrible his results has been, but I still believe that Roger made the right choice.

Federer has decided to split with friend and coach Paul Annacone (sport360.com)

Next year, Federer won’t have many points to defend. It is likely the expectations for him amongst fans and analysts alike will not be as great as it once was, so he will be operating with very little pressure (if anything he may be even more motivated to prove the doubters wrong). He can continue to be selective with his schedule without his rankings taking a severe hit.

Not having a coach should benefit Federer next year (no, I don’t think he should look to hire a replacement for Annacone). Federer has been success before without a coach in his career. When you’re as naturally gifted, intelligent and instinctive as Roger, why do you need one? Another benefit will be the racket change (something I anticipate he’ll do full time during the off season) which will add some power (and restore some confidence) to his game.

Moreover, Roger Federer expects that he will bounce back next year. He still loves the sport and he still loves proving the critics wrong – like he did in 2012.

Look for him to prove them wrong yet again in 2014.