One of the more eye-opening (and impressive) results from the opening day of the 2013 U.S. Open was Venus Williams’ first round victory over 12th-seed Kirsten Flipkens 6-1, 6-2.

It was almost circa 2001 for the elder Williams sister. She was blasting away first serves that resembled missiles (regularly registering over 100 mph); her forehand was pushing her opponent off the court during rallies, and her court coverage suggested a player of supreme fitness. Also noticeable during the match was the agressive style of play (including attacking the net with her 6’1″ frame and long wingspan) which has helped her win seven Grand Slams during her illustrious career.

We have not seen such a performance from Venus in a few years now.

Between her battles with injuries, her age, and more specifically her battle with Sjogren’s syndrome (an autoimmune disease that often results in arthritis in the joints and increased fatigue) Venus has had very little time to play many matches the past couple of years. As any athlete will tell you, the more matches you play, the more momentum and confidence it builds in your game – something Venus has not had the luxury of doing. As a result the American came into the 2013 US Open unseeded and ranked 60thon the WTA Tour. But all that seemed forgotten yesterday against an opponent in Flipkens who was a semifinalist at Wimbledon and someone whom we predicted to go far in our preview of the women’s draw.

But how much should we make of Venus’ upset victory? Could it be a sign of things to come, an indicator that the 33-year old veteran may have another deep run left in a tournament that she clearly loves (other than perhaps Wimbledon)? Or was it just a feel good story for one day?

Based on the way she played and how healthy and fit she looked, one could envision a potential quarterfinal against younger sister Serena. Against Flipkens, her stamina allowed her to finish off the match after coming out of the gates strong (something that has dogged her all year long) so it looks like she is in great physical shape. But the nature of her illness is such that she may feel terrific one day and then the next day feel extremely worn out, so one should probably not read too much into her fitness. 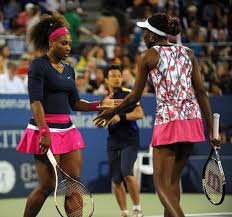 Could we see a quarterfinal between Venus and sister Serena?

Based on the draw, if she can keep the energy level up; get a handle on her illness; and continue to play that attacking style of tennis that we saw yesterday, then it should not come as a shock to find Venus Williams playing into the second week of the tournament. I for one would love to see another sister vs. sister matchup during the ladies’ quarterfinals.

We can be almost certain that Serena will be present for the quarterfinals. But will Venus?

Do not dismiss the thought. One never should when it comes to a former champion with something still left to prove.