When it comes to the majors in women’s tennis over the past couple of years, Serena Williams has always been a heavy favorite. However, this time around it doesn’t feel that way.

One reason may be due to her performance in the previous Slams in 2013. Serena did win the French Open, but failed to get to the semifinals at Wimbledon and the Australian Open. But another more popular reason might be the emergence of a legitimate threat and rival. No, it’s not Maria Sharapova (who has withdrawn from the U.S. Open due to a shoulder injury), instead it’s Victoria Azarenka, who beat Serena at the Cincy Open finals last weekend. Nobody has played better on hard courts than the Belarusian (that includes Serena) and unlike her peers she is not intimidated when going against the world number one. In last year’s final against Williams, Vika found herself serving for the match in the final set before Serena came roaring back to win the next four games – and the match. Azarenka will be determined to atone for last year, and with both players on the opposite side of the women’s draw, tennis fans around the world are hoping for a rematch at Flushing Meadows.

But is there anyone else in the field that can prevent a Serena-Vika duel for the U.S. Open title? Time to analyse the draw.

Serena Williams’ Quarter
Serena begins her title defense with a tough first round opponent in former French Open champion Francesca Schiavone. Her fourth round opponents could be either fellow Americans Jamie Hampton (23rd seed), Sloane Stephens (13th seed) or Urszula Radwanska (younger sister of Agniezska Radwanska). Of these three one certainly has to go with Sloane Stephens. The young American has done well in the previous three Slams (semifinals at Australia, fourth round at Paris and quarterfinals at Wimbledon) and has had a pretty decent summer which includes a victory over Sharapova. The other top seed in this quarter is German Angelique Kerber, whose 2013 has been disappointing following a breakout 2012 campaign. She has done nothing to suggest a deep run in New York. This might be a great opportunity for the 12th-seed Kirsten Flipkens. Like Serena, she too faces a tough first round match – Serena’s older sister Venus.
Quarterfinal: Serena Williams vs Kirsten Flipkens
Winner: Serena Williams

Agniezska Radwanska’s Quarter
Both top seeds in this section of the draw, Agniezska Radwanska and  Na Li, have looked strong this summer. Radwanska made the finals at Montreal where she gave Serena all that she could handle before having to withdraw from her quarterfinal match versus Li at Cincinnati to attend her grandfather’s funeral. It gave Li a Cincy Open semifinal date with Serena where she performed well and honestly could have won that match. Based on current form and the draw that was given to them, it would be disappointing if both these women did not advance to the quarters (assuming that Radwanska is fine emotionally). We could see a potential fourth round with Radwanska and Wimbledon runner-up Sabine Lisicki. Lisicki defeated Radwanska in the semifinals at Wimbledon, but that was on grass where Lisicki excels. Radwanska should be a heavy favorite on hard-courts. Meanwhile Li should be wary of young Laura Robson whom she could meet in the third round (Robson upset Li at last year’s U.S. Open) as well as the 9th-seed Jelena Jankovic as a possible fourth round opponent.
Quarterfinal: Agniezska Radwanska vs Na Li
Winner: Na Li 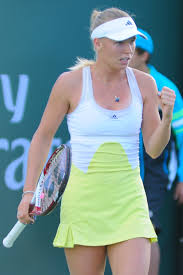 Sara Errani’s Quarter
This is the widest open quarter in the tournament – both men and women! The two top seeds (Sara Errani and Caroline Wozniacki) are no sure bets of even making the quarterfinals, let alone emerging from this section of the draw. Errani (whose game is much better suited for clay) may be the most vulnerable top seed in the entire tournament. She could fall as early as the third round if she were to meet the veteran Russian Svetlana Kuznetsova (seeded 27th) and particularly in the fourth round were another Russian, Maria Kirilenko was to meet her there. Kirilenko, who is a solid – if not spectacular – player should be the one to watch at this end. On the other hand, Wozniacki (who has not seen a second week in eight of her past 10 Slams) should feel quite happy with her draw as there are no other big names in her half.
Quarterfinal: Caroline Wozniacki vs Maria Kirilenko
Winner: Caroline Wozniacki

Victoria Azarenka’s Quarter
Only Serena Williams has beaten Azarenka at Flushing Meadows the last two years, and her last 3 tournaments played on hard-courts she spots a 20-1 record. Needless to say the second seed is a heavy favorite to at least make the quarters here. Her biggest challenge before then would be Ana Ivanovic (former world number 1 and the 13th-seed) in the fourth round. Ivanovic at this point of her career just lacks the consistency (particularly on her serve and backhand) to challenge Vika. Speaking of inconsistency, Petra Kvitova is the other top seed in Azarenka’s part of the draw. No other player is as frustrating to watch than the 2011 Wimbledon champion. She is just as capable of blowing out Azarenka in the quarterfinals (she has a favorable head-to-head record) as she is of being upset in the first round by Misaki Doi. Another player worth watching is 2011 U.S. Open champion Samantha Stosur. The Australian fell to Azarenka in the quarterfinals here last year. Could there be a repeat in 2013?
Quarterfinal: Samantha Stosur vs Victoria Azarenka
Winner: Victoria Azarenka

SEMIFINAL #1
Serena Williams vs Li Na
Li Na should feel like she has a chance given how close their semifinals went in Cincinnati. Much like when Serena lost to Sabine Lisicki at WImbledon, Li’s aggressive style of play and big hitting could very well pose a threat if she is on her game. The advantage for Serena is that she is less prone to make errors and she has the greatest serve in women’s tennis history. It should be enough to see her through in another three-setter.
Winner: Serena Williams

SEMIFINAL #2
Caroline Wozniacki vs Victoria Azarenka
Poor Caroline. Her defensive style of tennis and her lack of firepower on any of her shots should play right into Azarenka’s hands. Usually Wozniacki’s style is to retrieve her opponents’ shots until they make errors. However Azarenka is one of the purest strikers of the ball, especially on hard-courts. She will also be able to dictate points from the baseline with regularity without any fear of being overpowered by the soft-hitting Dane.
Winner: Victoria Azarenka

FINAL
Serena Williams vs Victoria Azarenka
The final that most would be expecting from the start of the tournament. Azarenka has been the one player who is not afraid to go bow-for-blow with the number one player in the world. Moreover she has had some success against Serena. Her two victories against the American this year were both on hard-courts (Doha and Cincinnati) and she will be eager to avenge last year’s loss – one where she was actually serving for the match. This is a match where Serena is going to lean on her serve more than usual. If she doesn’t have a great day serving then one has to give Azarenka a slight edge on this surface where she is so confident and comfortable. In a match we anticipate to be a three-set thriller (perhaps a third-set tiebreaker to decide the title) Serena’s serve will show up and be the difference in the match – plus we believe Serena will use that loss at Cincy for extra motivation.
Champion: Serena Williams