The U.S. Open – the final major of 2013 – begins Monday with plenty of storylines for the men.

Let’s start with the fact that there are no overwhelming favorites this year – even among the Big Four!

There’s Rafael Nadal, who missed last year’s tournament due to injury but has not lost a match on hardcourts in 2013. Following his victory at both ATP Masters in Montreal and Cincinnati, many consider him as the overall favorite.

However, last year’s champion Andy Murray has made the finals in his last four Slams (he missed the French Open due to injury) and is looking to keep that trend going. He too is another strong favorite, as is world number one Novak Djokovic – perhaps the best player on hardcourts. The other member of the Big 4, Roger Federer, has had a miserable 2013 and is seeded seventh at this event (it still doesn’t sound right when you read it). He will be determined to salvage his year by winning it all in New York.

The quartet have monopolized the Slams this decade. In fact, one has to go back to the 2009 US Open to find the last time someone other than the Big 4 (Juan Martin del Potro) won a major. Will this trend continue? The men’s draw was released yesterday so it’s time to predict how this year’s tournament will play out.

Novak Djokovic’s Quarter
Though he has only one Slam under his belt in 2013, it was been another great season for Nole. He lost an ultra-tight French Open semifinal to Nadal and after a marathorn semifinal against Juan Martin del Potro at Wimbledon, looked flat in the finals. The number one seed should cruise through the first two rounds before a possible third-round meeting with Grigor Dimitrov (the youngster nicknamed “Baby Fed” who has a victory over Djokovic earlier this year  in Madrid). It should be an entertaining affair! The other top seed in this section is Juan Martin del Potro. He should also be favored to make the quarterfinals – though German veteran Tommy Haas will be a tough out in the round of 16. After a narrow defeat to Djokovic at the semifinals of Wimbledon, the big Argentinian will fancy his chances at Flushing Meadows.
Quarterfinals: Novak Djokovic vs Juan Martin del Potro
Winner: Novak Djokovic

Andy Murray’s Quarter
There’s not much to complain about with this draw if you’re Andy Murray (other than having Djokovic on your half of course). He starts off with French veteran Michael Llodra whom he’s never lost to, and his possible third and fourth round opponents (Juan Monaco and Nicolas Almagro respectively) are better known for their play on clay. So look for the defending champion to advance comfortably to the quarterfinals. The one player that should concern Murray is the fifth-seed Tomas Berdych. Berdych made it all the way to the semifinals here last year (taking out Federer in the quarters) and took Murray out at Cincinnati last week. Berdych has a tougher path to the quarterfinals (a streaky Stan Wawrinka would a difficult fourth round opponent) but he’s playing too well lately to lose beforehand.
Quarterfinals: Andy Murray vs Tomas Berdych
Winner: Andy Murray

David Ferrer’s Quarter
Ferrer is the Rodney Dangerfield of men’s tennis. Perhaps it’s his small statue, or his lack of firepower in his game. He may be the fourth seed in this tournament but nobody takes him seriously as a contender in New York. It also does not help that he’s struggled since Wimbledon. At first glance his draw looks comfortable. The first two rounds should provide the man known as “Little Beast” time to regain his confidence and his game before a possible encounter with the ever-dangerous Ernest Gulbis in the third round. And even more dangerous could be Wimbledon semifinalist Jerzy Janowicz in the fourth round. The 22-year old Pole is one of those younger players looking to move higher up on tennis’ hierarchy. Another such player is the hard-serving Canadian Milos Raonic who made the finals at Montreal. I like him to make his first deep run in the majors here, with him upsetting eighth-seed Richard Gasquet in the fourth round. A quarterfinal featuring two future top tens (Raonic is already ranked tenth) is very possible here.
Quarterfinals: Milos Raonic vs Jerzy Janowicz
Winner: Jerzy Janowicz 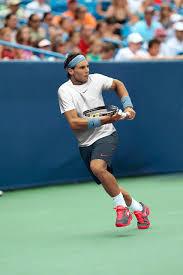 Rafael Nadal’s Quarter
The big story in this quarter is that Roger Federer, seeded seventh (his lowest seed in over a decade) has been drawn in the same section as Rafael Nadal. It is very possible that the two rivals in meet in the quarterfinals, for their first ever meeting at the US Open. It’s unfortunate that these two should meet this early – rather than a semifinal or final – but it would be a safe bet to assume that the winner here would have a much easier time getting to the finals (given that Murray vs. Djokovic would most likely be the other semifinal match). Of the two players, Federer has the easier path to the quarterfinals. Nadal could face the Nicolay Davydenko/Fernando Verdasco winner in the third round. Davydenko in particular has always played him well. In the fourth round he could then face the big-serving American John Isner, whom he defeated in the Cincy finals 7-6, 7-6 in as tight a straight-sets win as one could get. Federer should be the fresher of the two come the quarterfinals, but it is hard to ignore his poor career head-to-head against his main rival (10-21 record; including last week’s loss in the Cincy Open quarterfinals).
Quarterfinals: Roger Federer vs Rafael Nadal
Winner: Rafael Nadal

SEMIFINAL #1
Novak Djokovic vs Andy Murray
Murray seems to be the favorite in this matchup given that he defeated Djokovic in the Wimbledon finals. However that was on grass, in a stadium where 99.9% on the crowd were behind Murray. This will not be the case this time around, and this is where I believe the slight advantage might go to the top seed. Look for this one to be a marathon match, much like their memorable five-set thriller at the semifinals of the 2012 Aussie Open – won by Djokovic.
Winner: Novak Djokovic

SEMIFINAL #2
Jerzy Janowicz vs Rafael Nadal
Janowicz is coming off a semifinal appearance in the previous major at Wimbledon, so the feeling is that nerves should not be a big issue here. He should also be hoping that Nadal’s quarterfinal match with Federer is one of those instant classic five-set thrillers. Even so, it is difficlt going against Nadal’s experience at this stage of the tournament.
Winner: Rafael Nadal

FINAL
Novak Djokovic vs Rafael Nadal
The one good news for Djokovic is that the U.S. Open has decided to move the men’s final to Monday this year, meaning that he will have a full day to recover from his semifinal with Andy Murray. If the finals were held the following day (as had been the case before this year) then Nadal would be the pick here. Djokovic has lost to Nadal their last two matches. However Nadal had to dig deep at the French Open – his turf – to win in the final 9-7 and in Montreal it came down to a tie-breaker in the final set (the U.S. Open is the only major where the final set is decided by a tie-break). Both matches frankly could have gone either way. Nadal has not lost a match on hardcourts all year long. Odds say that he is due for a loss.
Champion: Novak Djokovic