A stunned Roger Federer following his second round loss at Wimbledon

2013 has not been good to Roger Federer thus far.

He has a single tournament victory to his credit – the Gerry Weber Open in Halle, Germany – and that was basically a Wimbledon tuneup.

It also didn’t count for much as he ended up losing in the second round at Wimbledon to a player (Sergiy Stakhovsky) ranked outside of the top 100. It also ended his streak of making at least the quarterfinals of a major at 36 matches.

The fact that this happened at his favorite tournament (Wimbledon) and surface (grass) must have been the defeat ever more painful for the Swiss. Furthermore, he has now dropped to No. 5 in the current world rankings, his lowest in a decade.

With the final Grand Slam of the year (U.S. Open) a little more than a month away and Federer’s game seemingly on a downward slope (age perhaps?) something had to be done to address the situation. 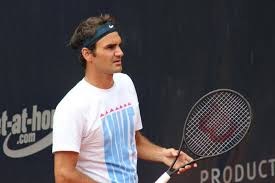 Federer practices with the new racket at Hamburg

So it came as only a mild surprise when Federer entered the German Open in Hamburg last week carrying a new prototype racket in the tennis bag courtesy of his longtime racket sponsor Wilson. The biggest difference in this newer racket is the size. After having played with a 90-square inch head for most of his career (which is very small compared to many of his contemporaries) the new racket has a 98-square inch head. An increase in racket size means a larger sweet spot (hence a greater margin for error), as well as increase in power and spin – perfect for a soon-to-be 32-year old with lots of mileage after a decade of being at or near the top of men’s tennis.

So far the results have not been great. Federer would go on to lose in the semifinals at Hamburg last week (to another player ranked outside the top 100) and then yesterday was stunned in the second round Swiss Open by Daniel Brands.

However that should not be reason enough for Federer to scrap the experiment with the new racket. This is not a change where the results are going to come overnight. It is going to take some time. Remember folks, this is an experiment! It may be odd that this change is happening during the middle of the season but it is also a sign that Roger is not being stubborn like most great players tend to be at that age and is willing to make changes.

Two of Federer’s greatest strengths are his footwork and his precision. That is the reason why he has been able to “get away” with playing with a smaller racket. But as he gets older and slower, and his strengths become less so, he is going to need help. How many times in the past year have we seen balls being shanked from Federer’s rakets? The newer, larger racket should help Federer in that regard.

Roger insists that he is happy with the change so far (see video above) and here’s hoping that he has the foresight and the patience to keep on experimenting with the new racket. Because not only could it rescue his game, it could extend his tennis career.